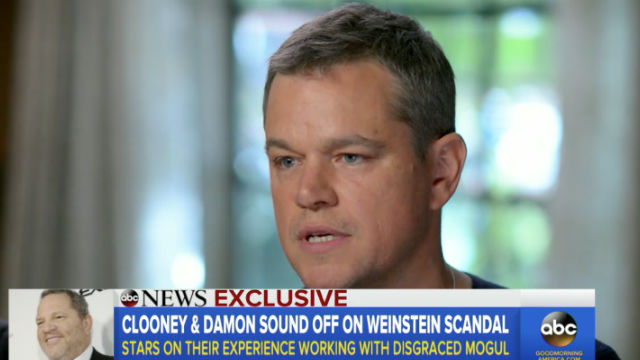 Matt Damon landed himself in hot water (again) over remarks he made regarding the systemic sexual harassment that has plagued Hollywood.

During an interview with Business Insider, Damon suggested that men who don’t harass women should be praised more.

“We’re in this watershed moment, and it’s great, but I think one thing that’s not being talked about is there are a whole sh*tload of guys — the preponderance of men I’ve worked with — who don’t do this kind of thing and whose lives aren’t going to be affected,” Damon said.

When asked if he would ever work with someone accused of sexual misconduct, he said it would have to be on a “case-by-case basis.”

“That always went into my thinking. I mean, I wouldn’t want to work with somebody who ― life’s too short for that,” he elaborated. “But the question of if somebody had allegations against them, you know, it would be a case-by-case basis. You go, ‘What’s the story here?’

Last week, the actor drew criticism for saying that allegations made against Sen. Al Franken (D-MN) shouldn’t be put in the “same category” as disgraced film mogul Harvey Weinstein.

“There’s a difference between, you know, patting someone on the butt and rape or child molestation, right?” Damon said. “Both of those behaviors need to be confronted and eradicated, without question, but they shouldn’t be conflated, right?”

Someone who cares about Matt Damon should tell him to shut up.

Matt Damon = every white man who is used to people taking his opinion seriously even if he has no idea wtf he’s talking about.

Hi ladies, can we all just be quiet for second and stop chatting about our #metoo stories. Matt Damon wants us so to thank all the men who haven’t assaulted us for not assaulting us. pic.twitter.com/wlN1SNsXQq

Matt Damon is the epitome of a faux ally whose performative wokeness is more about servicing his own ego than the needs of the oppressed & disenfranchised . https://t.co/KN2tF3AzGj

imagine being Matt Damon and thinking “I should keep talking” https://t.co/lSEIyDsvE4

someone should tell matt damon there’s nothing remarkable about decency and basic respectful behavior, it doesn’t merit a profile. shows how low the bar is for white cis bros.

It’s truly astonishing that at this moment in time, Matt Damon has managed to make himself intensely unlikable WITHOUT being accused of sexually assaulting anyone.

The reason I’m not talking about “the good men” is because
A.) They are not victims in this
B.) If you are a good man, you don’t seek accolades for not being a rapey bastard
C.) As Matt Damon exemplifies in terms of systemic misogyny “the good men” are often complicit

Me: Oh my god, someone broke all of my dishes!
Matt Damon, crashing thru door: You should talk about people who don’t break dishes.

Matt Damon- SERIOUSLY? You are a smart man. A privileged, white man. This is NOT the time to ask for a pat on the back. How about we NOT celebrate men who are simply decent human beings. Stay on track, Matt. It’s not about you. https://t.co/mmdbqAUyP7

Listen, if I wanted to hear Matt Damon’s thoughts, I’d strike up a conversation with a drunk man loitering outside of a gas station

for real though, should have left matt damon on mars

who is matt damon’s publicist and when will a prince come and kiss her and wake her up from her sleeping spell? https://t.co/DJmYLTSwt1

(Matt Damon bursts into trial for serial killer)
“Why are we wasting time on this when we should be talking about all the men who AREN’T serial killers!”

Ben Affleck in every moment of life hoping no one asks him to comment on something Matt Damon has said pic.twitter.com/0Ee7p0zxng

When it comes to Matt Damon, I am constantly hunting for goodwill

Damon is in the midst of promoting his latest film Downsizing, which is being released this Christmas. Perhaps any press is good press?