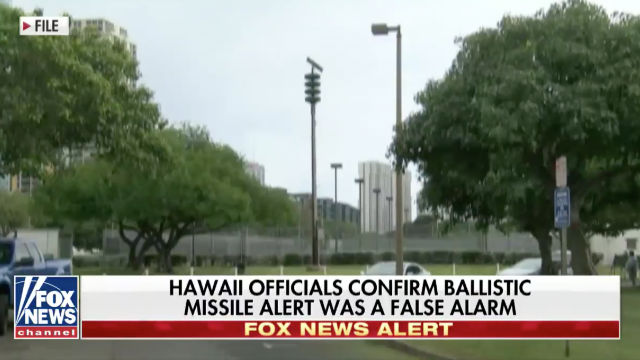 People in Hawaii got an emergency alert about an incoming missile that said this wasn’t a drill. Well, it was, and Twitter exploded over this massive, stunning fuck-up:

There is no missile threat. It was a false alarm based on a human error. There is nothing more important to Hawai‘i than professionalizing and fool-proofing this process.

Today’s alert was a false alarm. At a time of heightened tensions, we need to make sure all information released to the community is accurate. We need to get to the bottom of what happened and make sure it never happens again.

That is a hall-of-hame fuckup.

This is such a tremendous fuck up. https://t.co/j8yrjfg9L5

Seriously, whoever is working the emergency alert system in #Hawaii needs to be fired. pic.twitter.com/dVAOfkdlFB

All my military friends in Hawaii got this. All legit pissed the hell off. Someone’s ass I getting fired over this big ass mistake pic.twitter.com/ryFDDtVyLl

This was legitimately sent, but is NOT true. Can’t imagine what people in Hawaii who received this felt.

Someone who works for the State of Hawaii or Verizon or Apple or the Pentagon will be fired.

But what’s most terrible is that we’re at the point it could have been true. pic.twitter.com/Ud2XFi6NIB

Well, at least the person about to be fired in Hawaii can still relax in Hawaii.

So this emergency alert message was sent to phones all around the hawaii area and it turned out to be “just a mistake.” To me a mistake is getting the license plate one digit off on an amber alert and quickly fixing it not a freaking ballistic missile launch alert oh my god. pic.twitter.com/cljjoSyDlQ

what a colossal fuck up

For anyone who hasn't heard, it's a false alarm. There's NO missile heading to Hawaii. Please let folks know. I hope reporters dig into this to obtain assurances that it was a mere accident & not something sinister like hacking or priming the population to support a first strike. https://t.co/1jqtQ6W4yx

I had to go take my “as needed” anti-anxiety med because of that alert. I’m in Minnesota. I cannot imagine how folks in Hawaii are feeling. This is a supreme fuck up.

SO THAT WAS A HORRIFYING TWENTY MINUTES https://t.co/5DIXMxaLrd

How does someone accidentally send out a missile warning to Hawaii?

Somebody has some 'splainin' to do! https://t.co/H3rdEtUWvA

Good God. How did this warning happen? https://t.co/q3eby6QwHg

This is a helluva mistake! https://t.co/7dSZFS6VpC

The incoming ballistic missile notification that people received in Hawaii is false. Which begs the question: was it a hack or mistake?

How the hell does a "ballistic missile incoming, seek shelter immediately, this is not a drill" message get ACCIDENTALLY sent out? This is the rare case where an intentional hack would be more reassuring than simple human error.

this missile thing – wife at hotel said total hysteria/chaos. families evacuating told to seek a shelter. crying. panic. if it's an accident, or NOT – we cannot play this down. even a prankster should be put away for years.

FALSE ALARM, according to mayor. And now that I've reached shelter with my family, omg. Someone is getting fired.