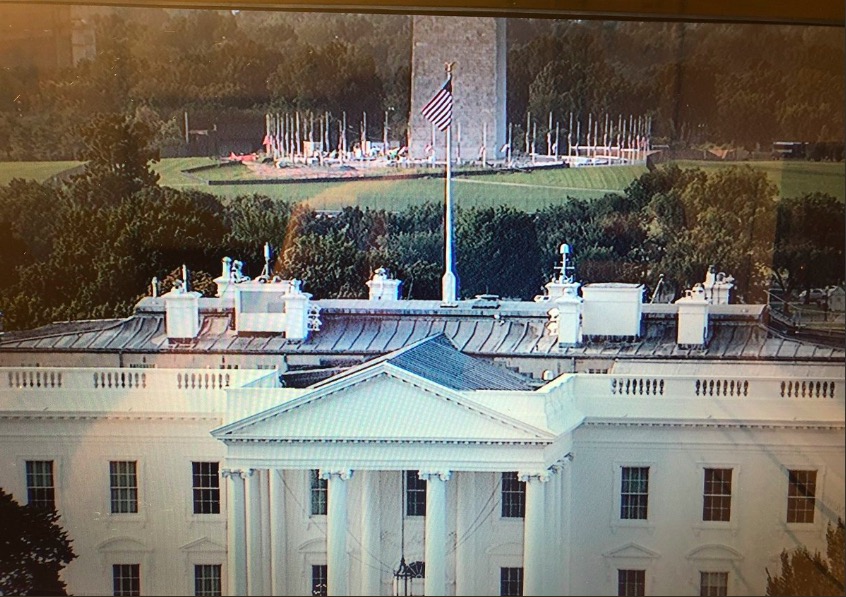 While flags at the Washington Monument and at the U.S. Capitol flew at half staff to mourn the loss of John McCain, the White House promptly returned its flag to full staff just two days after his death.

“The flag-lowering that lasted less than 48 hours breaks from precedent that it is lowered until burial,” ABC News reports.

It’s news to no one that President Donald Trump was not the biggest fan of McCain – nor the late senator of the president – but Twitter was quick to point out that the apparently pettiness of the move, and the image of the White House’s flag flying high in the wind while all the flags just behind it at the Washington Monument flew half staff, was a striking, insulting image:

Camera shot facing south over the White House – you can see the flag at the WH at full staff while the flags surrounding the Washington Monument are lowered pic.twitter.com/xT2KdPLgpB

A White House that still has the ability to shock.https://t.co/hcqmt2eE1P

Trump wraps himself in the flag but doesn’t know a damn thing about it. What a small man. https://t.co/S8iVQ5Xpmy

When @WhiteHouse staff (presumably long-time republicans) show up to work today, how do they feel about the flag flying at full staff?
Are they proud to stand with pettiness & envy over honor & protocol? https://t.co/lfCWR2AZeA

This photo brings the divide in D.C. between the WH and the rest of the federal government into high relief.

Flag all over the rest of the country: half mast.#MondayMotivation

MSNBC reports the White House flag is no longer at half-staff. Have you no humanity, @realDonaldTrump, no soul, no shame?

WH flag back at full-staff after being briefly lowered to honor McCain. No proclamation by the President ordering all US flags lowered for a mourning period

Fairly striking image — all of the flags surrounding the Washington Monument are at half-staff, though the flag atop the White House was raised to full staff just after midnight. pic.twitter.com/BwKRbqKk0G

Flags are lowered at the Capitol, too. https://t.co/DzSMEhKFlV

Flags at the Capitol remain at half staff for John McCain. The White House flag was raised to full staff just after midnight. pic.twitter.com/4aTw4BmQwF

Used to it, but this is embarrassing. And for @POTUS to call himself a champion of the military and be THIS petty after the death of a political foe—widely admired for his service—is sad. https://t.co/7DKSHH1dUz

such a petty dickhead https://t.co/amr3xQqdWL

A few reporters pointed out that there is a code for the duration of time the White House should fly flags at half-staff for Congress members, but that the code is loose and often ignored in favor of paying tribute for a longer time:

Flags are still lowered in McCain’s honor at the U.S. Capitol and on the National Mall this morning.

U.S. Code says: “The flag shall be flown at half-staff … on the day of death and the following day for a member of Congress.” pic.twitter.com/tIJkB8txpP

Looks like Trump is sticking tightly to the usually-loosely-observed code on lowering the flag to half-staff for McCain. Obama lowered flag for 4 days for Ted Kennedy, 5 for Robert Byrd. https://t.co/bvi6HykUyX and https://t.co/btWwRdsq9H and https://t.co/Y8aMF9wCSt pic.twitter.com/73w3mid4mM