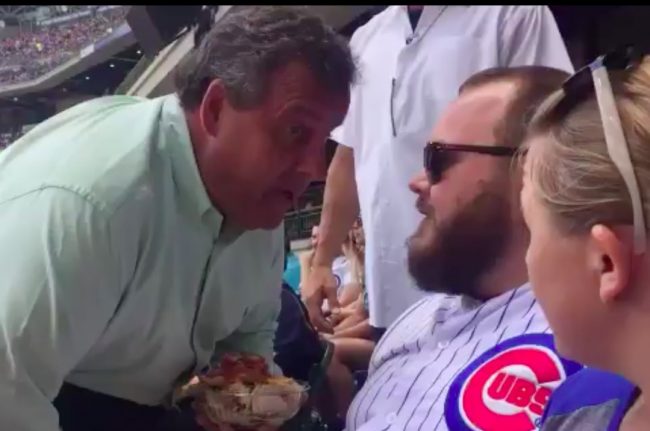 At this point, it’s almost not news when video or photos emerge of Chris Christie screaming at somebody or just waddling around in a huff.

If you missed it yesterday, the latest Christie blow up took place at a baseball game, where the governor was filmed getting right up in a heckler’s face — while holding a large bowl of nachos.

At #Cubs #Brewers game. #ChrisChristie was getting razzed by fans, so he got in the face of one of them. 5:30 on @WISN12News pic.twitter.com/sx8euMgFy2

The up close face time between the Governor of New Jersey and a random Cubs fan swiftly drew — much deserved —  mockery from all corners of the Internet.

But it was that nacho bit that really put people over the top. — The commentariat were merciless!

Chris Christie telling off a Cubs fan while cradling his nachos is glorious. https://t.co/5f7LSN5K0d

I wish someone would hold me like Chris Christie holds his nachos. pic.twitter.com/iTyvh4wydV

Rule Number 1 – Don’t talk shit to Chris Christie when he hasn’t had a single one of his nachos yet pic.twitter.com/MjK7j6UpF7

Chris Christie got face-to-face with a Cubs fan today. He also got butt-to-face with 3 other rows at the same time. https://t.co/vS6KZAy9Mp

And don’t ever again question Chris Christie’s humanity after seeing him cradle those nachos like a mother primate cradling its young.

In 2017, CC’s nacho game is lit. Look at those toppings. pic.twitter.com/MwNDemDNCr

There is nothing less intimidating than Chris Christie saying “you’re a big shot” with a tub of nachos and pants pulled up to his chest pic.twitter.com/dhIK1w63YW

Chris Christie is going after this Cubs fan while keeping an absolutely textbook cradle hold on the nachos. Masterpiece! pic.twitter.com/gDVlxsse3P

Chris Christie’s pants are higher than his approval rating.