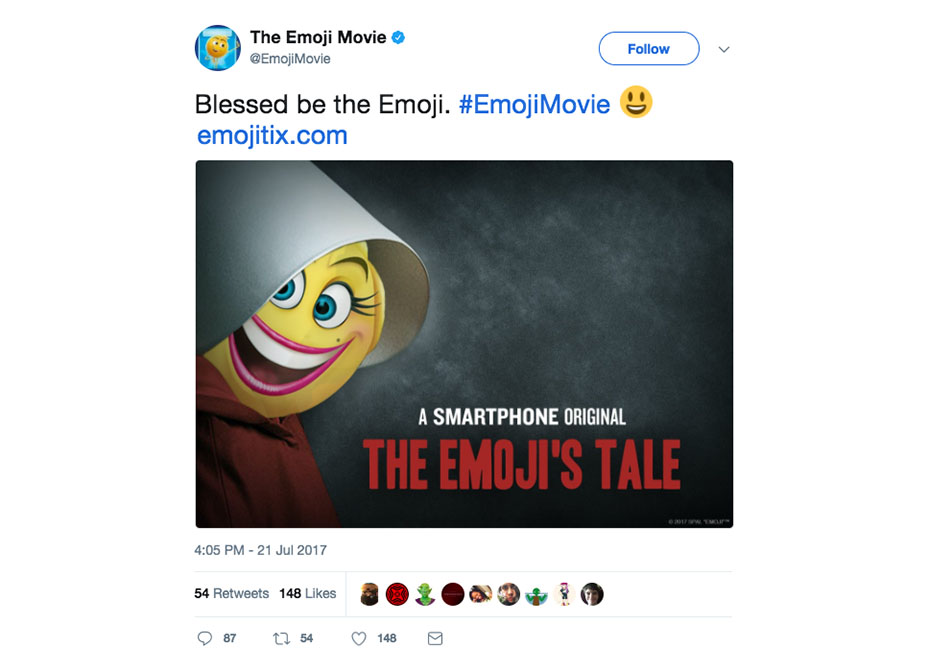 The Emoji Movie is under fire for tweeting a parody of Hulu’s hit drama The Handmaid’s Tale.

On Friday, The Emoji Movie Twitter account sent out an ad featuring an emoji in the now-iconic red handmaid robe with the text: “A Smartphone Original: The Emoji’s Tale.” The image was captioned  with “Blessed be the Emoji” in the tweet.

The Handmaid’s Tale, based on the Margaret Atwood novel, is about young women are forced by the government to procreate for wealthy families in a futuristic totalitarian society.

The tweet promoting the yet-to-be-released Emoji Movie has since been deleted, but not before it sparked outrage from Handmaid’s Tale fans and others.

Don’t think the team from @EmojiMovie have ever read @MargaretAtwood. https://t.co/eXrA993le8

Whoops. The Emoji Movie deleted their shitty ad. That was quick.

Looks like they deleted it, but the internet is FOREVER @EmojiMovie pic.twitter.com/mWC34kD6Nm

Do TRIUMPH OF THE WILL next.

Why has everyone in my timeline suddenly found an awful Emoji Movie tweet that’s two days old?