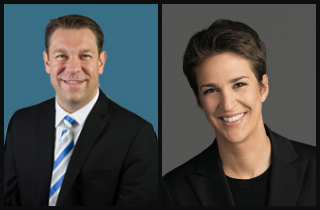 While traveling Thursday evening, Rep. Trey Radel (R-FL) held an impromptu “town hall” with his Twitter followers, talking about anything from politics to hip-hop to beer-drinking. When Radel spoke kindly of MSNBC host Rachel Maddow, one conservative Twitter troll attacked him, resulting in a swift rebuking from the lawmaker.

The GOP congressman tweeted that a mutual friend informed him of Maddow’s “wicked” martini-making abilities. Despite agreeing on very “little” with the MSNBC liberal, he wrote, “wud love to have drink w her.”

Re: drinks. Mutual friend at Italian Embassy says @maddow mks wicked martini. Agree on little but wud love to have drink w her. #treyonplane

In response, a conservative Twitter troll named “It’s a REPUBLIC!” emerged from the depths of the social networking site to scold the Republican for daring to speak kindly of the “Spite House strap-on tool,” telling him “how embarrassing” it looks to have tweeted the known fact that Maddow is a female:

Taken literally, Mr. “REPUBLIC!” was “rolling on the floor, laughing [his] ass off.” That gave Radel time to respond with a quick smackdown:

“@notalemming: @treyradel Dude! how embarrassing! you just tweeted that @maddow is a her." It's u that gives us a bad name. Ur an idiot.

But as trolls are wont to do, Mr. “@notalemming” continued to berate the congressman, calling him an “elected narcissist” and the real “idiot” for wanting to “break bread with the US version of Al jezzera [sic].” Mind you, this Twitter trolling was all because A) Radel referred to Maddow as a “her,” which is a known fact; and B) Radel spoke kindly of the woman’s martini-making skills.

Radel clearly knew how to handle the troll:

He later had this to say:

Not often I come to defense of @maddow but some on @twitter have IQ of a grilled cheese & manners of a belligerent drunk. #treyonplane