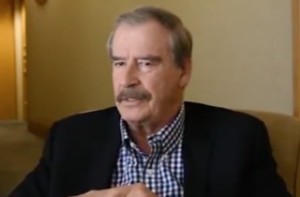 Donald Trump‘s Cinco de Mayo taco bowl tweet was never going to go over well, all things considered, and it seems to have prompted more slams from the former president of Mexico.

Vicente Fox recently tried to make nice with Trump a contentious back-and-forth. Fox once slammed the real estate mogul’s proposal to have Mexico pay for the “f*cking” border wall, then more recently invited Trump to see what life is truly like for Mexicans. That truce doesn’t seem like its going to last though, as Fox recently taunted Trump’s immigration and Chinese trade re-negotiation promises with a series of jabs over where his clothing line comes from.

Hey @realDonaldTrump, bringing jobs back to US – does that include your ties & shirts? #MadeInChina pic.twitter.com/e5SkBJC42b

How expensive your suits & ties be if you tax them, @realDonaldTrump? It’s insane to tax products made in China or Mexico #MadeInChina

Fox wasn’t done yet though. He gave an interview with Washington Examiner where after saying Trump was wrong to demonize Mexicans, he called the mogul’s supporters lazy, TV-addicted drunkards.

“We need to wake up that citizen. We need them to take them away from the TV and drinking beer, to working hard, to getting the skills, to getting knowledge, and they will come along, like everybody else.”