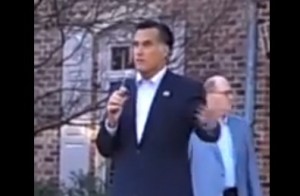 The controversy surrounding rising Republican star and Papa John’s CEO John Schnatter‘s crusade against his own employees’ health care has inadvertently thrust obscure GOP figure Mitt Romney back into the spotlight, if only tangentially. The internet is seething with rage at Schnatter’s combined apathy for providing health insurance to his employees and hideously conspicuous abode, but to give you some idea of just how obnoxious Schnatter’s digs are, you have to hear car elevator enthusiast Mitt Romney being impressed by it at a fundraiser back in April.

Papa John’s CEO John Schnatter has drawn populist ire by continuing his public relations offensive against President Obama‘s Affordable Care Act by insisting that his company’s owner-operators would cut employees’ hours in order to avoid having to cover them under the new law. Along with his previous dire warning that the law might jack up the price of his lousy pizza by fourteen cents, and a renewed focus on his ridiculously luxurious Louisville, Kentucky digs, Schnatter is about as popular as a Papa John’s pizza at a gathering of humans with functioning taste buds.

Just how obnoxious is Schnatter’s estate? It has, among other things, a “22 car multi-level underground garage which has its very own “valet office”, car wash and a gigantic motorized turn table-driveway to help park stretch limousines.”

When Schnatter hosted a fundraiser for then-somebody Mitt Romney back in April, even the richer-than-God’s-agent Romney had to gush. “What a place this is,” Romney said, before uttering the closest thing to “Holy shit” that he’s allowed to say. “My goodness.”Who would have imagined pizza could build this?”

“This is really something,” Romney continued. “Don’t you love this country? What a home this is, what grounds these are, the pool, the golf course.”

As it turns out, 51% of Americans don’t think either of those things, they think “No one should have to die in an emergency room so Papa John can rotate his limos.”

The speech also contains some of that great hindsight ironicalness, as Romney, speaking just a month before he would be caught on hidden camera blasting 47% of the country (51%, as it turns out) as moochers, tells the revelers at Papa’s place that President Obama has “taken to dividing the American people.”

As always, the point is not to hate Papa John Schnatter because he’s rich, it’s to pity him because he obviously doesn’t understand that “pizza” didn’t build his place, people buying pizza built it, and people not buying pizza can sure as hell un-build it: