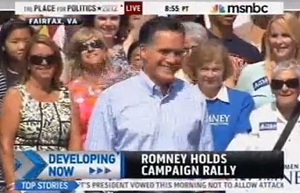 Following a day in which he was lambasted from nearly every political quarter (including his own campaign), Republican presidential nominee Mitt Romney avoided repeating his dishonest political attacks on President Obama over the deadly violence in Libya and Egypt. At a campaign event in Fairfax, Virginia, Gov. Romney referenced the incident by decrying the loss of American lives, but a heckler in the crowd wouldn’t let Romney forget how he had ruthlessly exploited those deaths. “Why are you politicizing Libya?” the protester yelled, before being shouted down by the crowd’s chants of “USA! USA! USA!”

Romney greeted the cheering of the crowd by saying “You guys are the best, Ill tell you. You give me such a boost of energy and optimism. I’m excited about our future.”

He then pivoted to the violence in Libya that claimed the life of U.S. Ambassador to Libya Chris Stevens and three others, saying “I know that we’ve — we have heavy hearts across America today. I want you to know, things are going to get a lot better.But recognize that we’ve lost four diplomats across the world, we’re thinking about their families and those that they’ve left behind.”

“what a tragedy to lose such a wonderful…” he continued, as a heckler in the crowd shouted “Why are you politicizing Libya?”

“…wonderful people that have been so wonderful and appreciate their service for the country,”Romney concluded, as the crowd shouted down the heckler with chants of “USA! USA! USA!”

“I would offer a moment of silence,” Romney quipped, “but one gentleman doesn’t want to be silent, so we’re going to keep on going.”