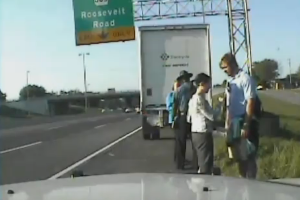 Last September, Janet Huckabee was involved in a multi-car accident alongside Interstate 30 in Arkansas. Last week, she settled the incident, paying $100 for “careless and prohibited driving.” However, the situation doesn’t seem to be over for the wife of former Governor Mike Huckabee. The Arkansas Times has obtained video from the dashboard camera which features a bit of arguing between Huckabee and the responding state trooper.

It would appear that Huckabee lost control of her vehicle and accidentally swerved in front another car. However, in the video, she gets incensed when she hears the other driver accuse her of being on her cell phone. The Tolbert Report has a transcript of that part of the argument. Here is some of it:

After that transcript was posted, Huckabee’s attorney contacted Tolbert Report to tell them that the phone records eventually showed that Huckabee had not been using her phone at the time of the accident.

While it’s probably embarrassing that the video is out there, it doesn’t amount to that much more than raised voices typical of a stressful situation. It’s pretty unlikely that it will do any real harm to either Huckabee or her husband.

Watch the video from the Arkansas Times below: