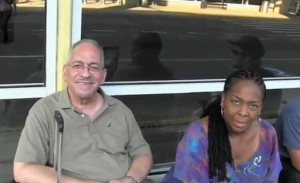 So far during the 2012 election, the Rev. Jeremiah Wright-based “Willie Horton okeydoke,” as Spike Lee calls it, has failed to gain any traction, but that doesn’t stop conservatives from exploiting the white panic he evokes in them. So far, though, only The Blaze has bitten down on a piece of video that FishbowlDC’s Betsy Rothstein hypes as “all out batshit irate,” as the good Rev. “los(es) his flipping mind” on an ambush journalist.

Despite persistent attempts by a segment of the right-wing media to resurrect race-based attacks on President Obama, “issues” like Reverend Wright, the New Black Panthers, and pioneering late Harvard Professor Derrick Bell, these attacks have failed to make an impact, but the white panic they evoke is still good for hits and ratings. Wright is an especially effective bogeyman due to his propensity for saying bad things about poor, defenseless white people.

There is already a well-documented low threshold in the mainstream media for black “anger,” but this bit of hype from FishbowlDC takes it to 11. Watch how FBDC’s Betsy Rothstein describes it, then watch the video:

The best part is the excruciating discomfort of watching Wright’s mood shift from reasonably docile to all out batshit irate as Drummond’s questions persist.

He began by pressing him about Morgan Freeman‘s belief that Obama is not the first black president. Wright had “no thoughts” on it. Drummond continued, “Do you think President Obama ought to be reelected?” No discernible answer. And then, an easy one: “What will the worship be on?” Answer: Jesus. The Bible. Drummond goes in for the kill: “What’s the weirdest thing you’ve ever read in the Bible?” This is when Wright goes insane and with a half smile-sneer combo replies, “How people don’t leave you alone when you’re trying to be with your family.” Drummond asks innocently, “That’s in the Bible?” He started in on another question and Wright lost his flipping mind: “LISTEN LISTEN I am NOT going to TALK to you,” he spewed. Even Wright’s wife had to calm him down.

Let’s have a look at this “batshit” tantrum, shall we?

Now, you can love Rev. Wright or hate him, but this is about as gentle and patient a brushoff as I’ve ever seen. Yes, Rev. Wright is known for his fiery sermons that don’t seem to bother people when they’re echoed (and then some) by white preachers, but that doesn’t mean you duck and cover whenever you see him, and then just make stuff up about him. When your overhyped attack is too thin even for The Daily Caller, time to throw it back.

Weird sidenote: Rothstein and The Blaze are both peculiarly obsessed with Rev. Wright’s “bright red sneakers,” which is just about the only thing they described accurately in the video.