Following the events of Charlottesville, the controversy over Confederate monuments is turning into one of many campaign issues in the Virginia gubernatorial race.

Last week Democrat Ralph Northam, the state’s current lieutenant governor, said in a statement, “I support City of Charlottesville’s decision to remove the Robert E. Lee statue. I believe these statues should be taken down and moved into museums. As governor, I am going to be a vocal advocate for that approach and work with localities on this issue.”

Republican Ed Gillespie said he believes “decisions about historical statues are best made at the local level, but they should stay and be placed in historical context.”

The Virginia Republican Party criticized Northam over his decision on Twitter today by saying that he “turned his back on his own family’s heritage.”

The tweet has since been deleted. Here’s a screengrab: 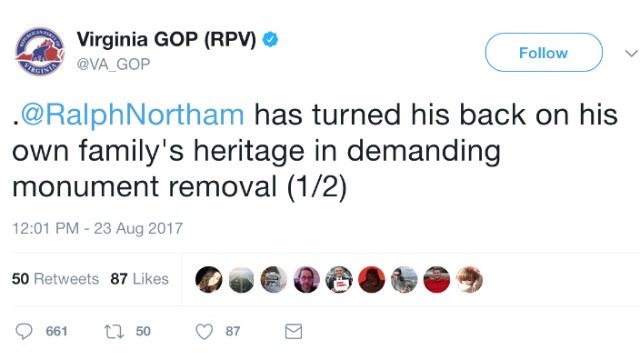 I feel fine about turning my back on white supremacy. How does @EdWGillespie feel about the president’s position? https://t.co/zhx2nWCGpH

I have a mixed view on monument removal–but I am old enough to remember when the GOP was not the party of nostalgia for the Confederacy. https://t.co/DzXjxjE2i1

Will this be the next embarrassing @VA_GOP attack: “Ralph Northam has turned his back on his family’s heritage in denouncing segregation?” https://t.co/DzXjxjE2i1

This is a hell of a way to frame this issue. What does Northam owe his family that others don’t when it comes to treason and slavery? https://t.co/TGe71oIGEl

If your family heritage is “owning slaves and treasonous rebellions” maybe turning your back on it isn’t a terrible idea? Just spitballin’ https://t.co/c79OWcLOkg

just call him a ‘race traitor.’ that’s clearly what you want to do. go ahead and spit it out https://t.co/5oZzcbYNoL

John Findlay, executive director of the state GOP, said the party was not suggesting Northam should stand with his ancestors as slave holders, but as soldiers who fought and were wounded in war.

“We said that Ralph Northam is turning his back on his heritage and family. It is because his great-grandfather fought for the side of the Confederacy and was wounded during the Civil War,” Findlay said. “When he wants to tear down monuments dedicated to those killed in action and wounded during the war, he is literally talking about a member of his own family.”

After the tweet was deleted, the Virginia GOP posted this:

Our previous tweets were interpreted in a way we never intended. We apologize and reiterate our denunciation of racism in all forms.

UPDATE –– 5:41 pm ET: A spokesman for Gillespie reacted by saying they were “right to apologize for the tweet and to take it down”: