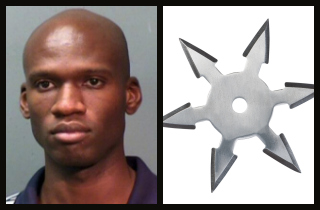 Monday’s mass shooting at the Washington Navy Yard has once again focused attention on gun regulation, particularly on the issue of background checks. Initial reports that an AR-15 was used were later retracted, but there are conflicting reports about whether shooter Aaron Alexis tried, and was unable, to purchase an AR-15. There is no doubt, though, that he was able to legally purchase the shotgun used in the shooting, and could have purchased that AR-15 if he’d wanted to, and thought far enough ahead. The same cannot be said of Ninja stars.

Both CBS News and The New York Times reported, based on multiple independent sources, that Aaron Alexis tried to purchase an AR-15, but was unable to do so in time to use it. Neither report provided legal citations, but Virginia state law does impose additional identification requirements for purchases of assault weapons. Both outlets are standing by their reporting, and Mediaite requests for clarification have, as yet, gone unanswered.

An attorney for the store, Sharpshooters, says that Alexis did not try to purchase the AR-15, but “asked about purchasing a handgun (no brand specified) but he was told that he could not purchase a handgun except for delivery to his home state through another Federally-licensed firearm dealer.  He then decided to purchase the Remington 870 express shotgun.”

When contacted by Mediaite, a salesman at Sharpshooters, who didn’t want his name used, contradicted the attorney, saying that Aaron Alexis didn’t express interest in purchasing an AR-15 or a handgun. He said he wasn’t the one who assisted Mr. Alexis, and when asked how he knew about the transaction, replied “Because I work here, I know what happens here.”

He refused to elaborate further.

In any case, Mr. Alexis did pass a federal background check, and given the proper ID and lead-time, could have purchased all of the AR-15s and handguns and extended magazines he wanted. However you feel about that, whether it’s a frightening fact of American life, or a shining example of liberty, how does it make sense that Virginia doesn’t ban those weapons, but it does ban the sale and possession of Ninja throwing stars?

If any person sells or barters, or exhibits for sale or for barter, or gives or furnishes, or causes to be sold, bartered, given or furnished, or has in his possession, or under his control, with the intent of selling, bartering, giving or furnishing, any blackjack, brass or metal knucks, any disc of whatever configuration having at least two points or pointed blades which is designed to be thrown or propelled and which may be known as a throwing star or oriental dart, switchblade knife, ballistic knife as defined in § 18.2-307.1, or like weapons, such person is guilty of a Class 4 misdemeanor. The having in one’s possession of any such weapon shall be prima facie evidence, except in the case of a conservator of the peace, of his intent to sell, barter, give or furnish the same.

As far as I can tell, no one has ever been killed by a Ninja star, a task for which they are apparently ill-suited. They did take a brief toll on late Apple CEO Steve Jobs‘ relationship with Japan’s tourism industry, but that’s about it. How is it that we are able to ban a weapon that kills no one, but we are completely unable to regulate weapons that kill tens of thousands each year?

According to the FBI, knives and stabbing weapons are used to kill about five times fewer people each year than guns, none of which appear to be Ninja stars. Why does the Second Amendment not cover Ninja stars? Why are Second Amendment advocates not up in arms about this?

On the bright side, the ban appears to be working. There have been a total of zero mass Ninja-starrings this year.

Update: The New York Times added the following correction to their report:

An article on Wednesday about the gunman in the Navy Yard shooting, using information from senior law enforcement officials, misstated a provision in Virginia state gun law. Out-of-state buyers must provide additional forms of identification to purchase a high-capacity AR-15 rifle; the laws do not prohibit the sales of all AR-15 rifles to all out-of-state residents.