WaPo Fact-Checker On Skeet-Shooting Photo: ‘Obama’ Still Might Be A Liar 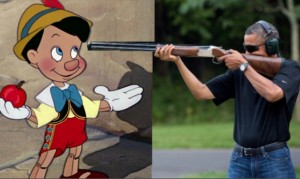 As expected, the release of a photo verifying President Obama‘s occasional skeet-shooting habit has only fanned the flames of hooting, brain-dead ridicule from his opponents, but the entire “Skeet-gate” episode exposed some in the allegedly liberal news media as, at best, panderers to those deranged partisan opponents. Case in point: The Washington Post‘s ostensibly “objective” “fact-checker” Glenn Kessler, who published a one-sided, factually challenged “fact check” in which he concluded that only photographic proof could vindicate the President’s unremarkable, unimpeachable claim of skeet-shooting at Camp David, and following the release of said photographic evidence, maintains that the president must produce additional birth certificates photos in order to satisfy Kessler’s brand-new standard of proof.

To the people who already hate President Obama, his admission to  New Republic editors Chris Hughes and Franklin Foer, when asked, if he had ever shot a gun, that “Yes, in fact, up at Camp David, we do skeet shooting all the time,” was always going to be a win. Despite the fact that the President only shared the tidbit when he was directly asked about it, it was an easy lift to make it seem as though the President was trying to exaggerate his affinity for guns in order to pander to gun owners, and to immediately assume that even this modest claim was a lie. That’s what partisans do. If and when a photograph was produced, the Obama-haters could shift from calling the President a liar, back to diminishing the President as the fake tough-guy he never presented himself as.

To everyone else, though, this looked like what it was: the grasping of straws by people who are losing every argument, and the continuation of the deranged mistrust of the President that is best embodied by the “Birther” movement. A normal person hears that the President engages in skeet-shooting from time to time, discovers that there is, indeed, a skeet-shooting range at Camp David, and says “Hmm, I did not know that before, and now I know it.”

A normal person might even wish, in passing, to see a photograph of the activity, but upon learning that there are almost no photographs of any personal activities at Camp David, would say “Ah, well, maybe next time.”

That normal person, upon observing supposedly objective journalists assuming that the President of the United States is probably a liar, and insisting that the only way to verify the claim is to produce a photograph, thinks “That seems pretty unreasonable. The guy just said there aren’t photos of pretty much anything from Camp David, and since when is photographic proof required to verify things that are not, in any way, demonstrated to be in doubt? What’s wrong with these people?”

That same normal person, when faced with the new demand that now, multiple photographs are required, starts to understand that these “objective” journalists are more interested in mollifying the deranged elements in their respective audiences, and perhaps attracting a larger one, than in determining the truth.

What, then, are normal people to make of WaPo’s Glenn Kessler, who responded to the release of the President’s skeet-shooting photo by maintaining his “Verdict Pending” ruling?

UPDATE, Feb. 2: The White House released this photograph of the president at the Camp David skeet range on Aug. 4, 2010. We are pleased the White House has become more forthcoming about this matter, though it does not quite answer the questions concerning the president’s “all the time” language. What do readers think? (Also, given some of the controversy this column generated, we refer you to a negative critique that appeared on Mediaite (you say “negative critique, I say “factual counterargument.” Tomato, tomahto) , which certainly reflects the views of a number of readers who are upset that we thought this was even an issue.)

God help the President if he ever claims to brush his teeth regularly, unless Pete Souza regularly trails him into the First Bathroom. Does the reverse hold true? If one photograph means an activity was only done once, does that mean that President Obama has taken the oath of office thousands of times?

Glenn Kessler is no dummy, he must be aware that this standard of proof has never been applied before, and a kind interpretation of his reaction would be that he’s just stubbornly protecting his own awful position. Presumably, he Jay Carney was correct, personal time spent at Camp David does not produce photographs, so to continue to demand additional photos, besides the one that proves the President right, is just stupid.

But Kessler gives away the game in that last update, asking “What do readers think?”

That’s the real standard here, not the truth, not the number of photographs, but what Kessler’s readers think, and not all of them. As he’s said all along, the main impetus for performing the “fact-check” in the first place were the suspicions of his readers, and, upon rereading that original post, a subtle clue to which audience he’s dancing for emerges:

We searched high and low through hundreds of news reports to see if there was ever any other mention of Obama engaged in skeet shooting.

The evidence suggests that until Obama had access to a shooting range as president, he never went skeet shooting.

A reader notes that because Obama said he does skeet shooting “all the time,” perhaps our standard of proof should be higher

It goes on like that, throughout the entire article. Kessler refers to the President as “Obama” 25 times in the piece, including the headline, but never once writes the words “President” and “Obama” together. Conservative contempt for the very idea of caring about how the President is referred to makes this an attractive piece of work for those readers who hate the President, but an objective journalist shouldn’t be indulging them.

Back in the real world, the deranged reaction to President Obama’s skeet-shooting pastime has, like the “Birther” narrative before it, acted as a clown detector, and the likes of Glenn Kessler and Erin Burnett have pushed the Red-Nose-O-Meter to eleven.