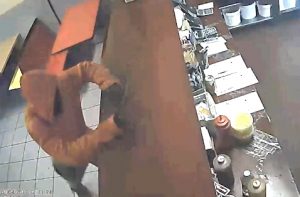 A knife-wielding robber’s attempt to steal from a Chinese restaurant went horribly awry when the restaurant’s employees came at him with…kitchen utensils. According to video obtained by The New York Daily News, the not-very-good robber entered the store and pulled out a knife. The people working in the restaurant grab other utensils including a soup ladle, and the robber runs off without having taken anything.

The restaurant’s owner, Yan Lin told the NYDN that she “wasn’t scared.” She continued, “Maybe because I own the restaurant and I didn’t want him to take the money.”

She described the incident, saying “I turned around and saw the guy … and I picked up my knife. I didn’t want him to jump over the counter, so I decided to fight back.” She says if she needed to, she would have fought harder. “We don’t only have knives, but we have hot oil,” she said “If I had thought about it, I would have poured the oil on him.”

The suspect, who still hasn’t been caught is also suspected in three other robberies in the Brooklyn neighborhood.