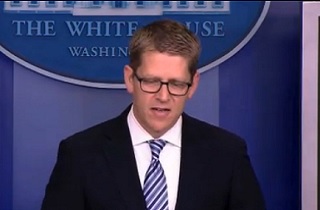 When politics and popular culture collide, the results can be disconcerting, like that box of Dollar Store macaroni and cheese that isn’t quite the right color. Buzzfeed’s Andrew Kaczynski flagged an exchange from Wednesday’s White House daily briefing, in which CNN Chief White House Correspondent Jim Acosta decided to try his hand at a Sharknado reference, and while he didn’t quite get it right, White House Press Secretary Jay Carney‘s response couldn’t have been funnier if it had been written for him.

At today’s briefing, CNN’s Jim Acosta asked Carney “Are we looking at sort of a Gridlock-nado, where we could have a government shutdown at the end of the month, and then go into default a couple of weeks later?”

For the uninitiated, Sharknado is the title of a legendarily absurd SyFy channel original movie about the catastrophic combination of sharks and a giant tornado. The suffix “nado,” when properly applied, instantly became a pop-culture shorthand to signify a hot mess. You can’t, however, just stick “nado” on the end of just anything. “Gridlock-nado” makes no sense, since combining a tornado with gridlock would actually solve the gridlock. Acosta also pauses too long, and places the emphasis on the wrong syllable. It should be “Grid-lok-NAY-doe,” not “GRID-lok-nay-do.”

The reference didn’t get much of a reaction, but Carney’s response? Pure gold:

Maybe Carney’s on to something, though. If Congress can’t get its act together, how much worse could NATO do?