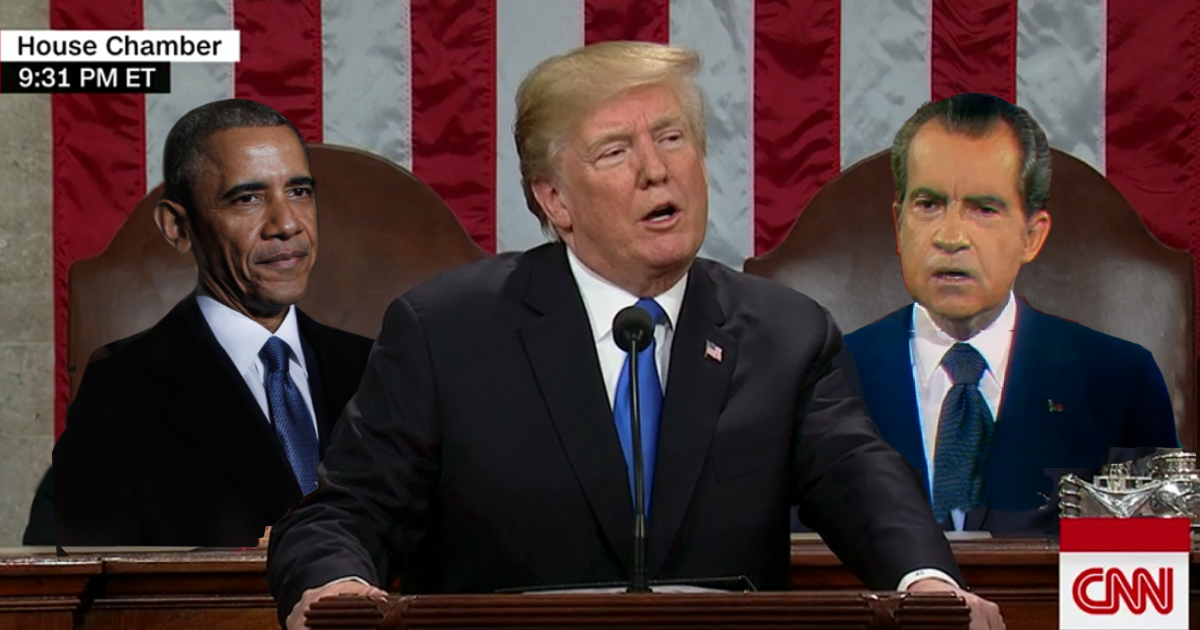 Tuesday night, President Donald Trump will (finally) deliver the State of the Union address before congress, after some hiccups with scheduling.

Surely there will be clip-worthy phrases and reactions from the address tonight, but let it not be said that Trump is the first to make a splash with a SOTU. There have been a number of memorable moments in the televised history of the annual Presidential oration, and we’ve gathered here some of the most … clippable.

Let’s go way back, first, to President Richard M. Nixon, who in the below clip from 1974 says something that would be utterly familiar in 2019.

“I believe the time has come to bring that investigation and the other investigations of this matter to an end. One year of Watergate is enough.”

By the way, six months after he said that he was gone.

Jumping around in time, we arrive at President George W. Bush in 2007, who had what he called a distinct honor.

Look, that was a very nice moment even if you’re the kind of person to call Bush Hitler. It’s the kind of moment that used to happen on occasion in the halls of power in this country. Odds we’ll see this warmth tonight? Yeah let’s go with just about nil.

President Barack Obama, like Reagan before him and Trump after, had more than one memorable SOTU moment. This one was not of his own design, however.

Depressingly, we must note for those too young to remember (oh god we are old), this was a super big deal at the time. Rep. Joe Wilson (R-SC) shouted into the quiet room “You Lie!” (which these days gets two capital letters) and there was a lot of kerfuffle after. Wilson eventually apologized for what he called a “spontaneous” outburst, but the moment lives on.

TELL US HOW YOU REALLY FEEL

President Gerald Ford was more than just the guy you forget about. He was also the guy who had the temerity to say … well, this:

“I must say to you that the state of the union is not good.” Oh there’s a lot of back story there, of course. Coming off the aforementioned Nixon resignation, he was right, things were not hunky-dory in the Union. Still, though, can you imagine any post-millennial president saying that? Oh they’ll imply it, and blame everyone else. But say it?

SAY MY NAME… NO NOT THAT NAME, THAT OTHER NAME

Trump himself already has more than one classic to add to the all time lists, including this one, with a name game.

The ICE agent he was referring to is Celestino Martinez, and Trump said “he goes by DJ and CJ. He said call me either one. So, we’ll call you CJ.” It was quoted a lot at the time, and even produced this musical gem:

Definitely memorable. Odds of a name replacement tonight? Probably not great, TJ. If that is your real name.

In 1991, when some of us were in high school, President George H.W. Bush‘s State of the Union address brought up a theme he’d introduced on the campaign trail, and that he’d made a centerpiece of his inaugural address. Here’s the enlightening clip:

That one spawned another media moment many years later that is relevant today. Rather than explain, just watch this composite clip from Mediaite’s Tommy Christopher:

#SOTU2019 memories: In 1991, George HW Bush talked about the “Thousand points of light.”
In 2018, Trump trashed it twice.
In 2017, Trump thanked “groups like the Points of Light, for making such a big difference in our disaster response efforts.”
So “authentic,” huh? pic.twitter.com/djDYYhMLya

Stay tuned to Mediaite and see for yourself when post the live stream. Get in at 8:45 ET and beat the lines!

[Featured image via screenshots and a fever dream.