Weren’t Invited To The Obama State Dinner? No Matter, Twitter Was!

Weren’t Invited To The Obama State Dinner? No Matter, Twitter Was! 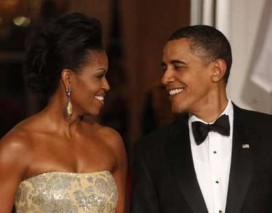 Is it just that between Twitter and YouTube and livestreaming we are able to pay better attention to White House affairs such as last night’s state dinner, or is it just that the Obama’s are more fun to pay attention to? Because I for one can not remember so much attention being paid to a state dinner in the past, unless you count the time John Travolta danced with Princess Diana during the Reagan administration.

I’m not entirely sure last night’s dinner welcoming Prime Minister Manmohan Singh of India could have received more coverage than it did — the NYT, HuffPo both ran live blogs of sorts, and Politico practically went wall-to-wall. Probably it didn’t hurt things that the first couple was so eye-catching. I mean really! Policy issues aside have you ever seen a more striking couple? Before returning home for his meatloaf dinner CBS’s Mark Knoller tweeted out the festivities with his usual triva-packed thoroughness, copied pasted below for your enjoyment.

# You’re on your own for the entertainment incl: Jennifer Hudson and the National Symphony Orch with Marvin Hamlisch conducting.

# Former Chief of Protocol Amb. Donald Ensenat, says he never learned why the “K Fund” was called that.

# Appropriations for State Dinners come from the “K Fund” – which is administered by the Office of the Chief of Protocol at the State Dept.

# The govt does not disclose how much tonight’s State Dinner costs. Experts I’ve spoken to say it could be as much as half a million dollars.

# The exchange of toasts seemed genuinely cordial and pleasant – as did the surroundings in the tent.

# PM Singh ends his toast pledging to work with Obama “to renew and expand our strategic partnership.”

# Invoking the words of Nehru, Obama toasts PM Singh: “to the future that beckons all of us. let us answer its call.”

# Obama begins toast: “we have incredible food and music and are surrounded by great frriends.”

# Hail to the Chief is being played as Pres. Obama and the Prime Minister and wife enter the tent. 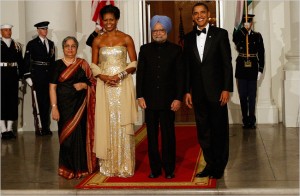 # Tent hardly seems like a temporary structure. Chandeliers hang from the ceiling. And four tapered candles light each table.

# Waiting for exchange of toasts to begin at State Dinner. The tent is far more spacious than the State Dining Room.

# @plocke I didn’t make the inquiry, but having heard the response to another reporter, I was honor bound to share it with one and all.

#All the guests have arrived and walked the press gauntlet if they chose. Waiting for exchange of toasts in the tent on the South Lawn.

# @Pearlagogo Havent a clue. Looked llike a well-tailored regular black tux. Every man looks more Maitre d’ in a tux, than US Pres.

# @samerfarha still at work. let you know in a couple hours.

# Very few of the men are asked who they’re wearing. Another double standard.

# @drcdiva free advertising for the designer? Then why not plug your toothpaste or brand of deodorant? I’m wearing Crest and Right Guard.

# Does the 5th Amendment cover “who are you wearing?” I’m sorry, on advice of counsel (or personal stylist), I decline to answer.

# Seems rude to ask “who are you wearing?” Like asking “how much money do you have on you?”

# Actors Alfre Woodard and Blair Underwood just arrived. As did director Steven Spielberg. They seemed at ease posing for photos.

# Some US officials seem ill at ease walking by the cameras upon arrival in the WH. Seems too much like the Golden Globes.

“Some reporters are asking arriving guests “who are you wearing.” Is that code for something? “Do you favor health care reform?” ”

# Some reporters are asking arriving guests “who are you wearing.” Is that code for something? “Do you favor health care reform?”

# @4lgsgood My knowledge of fashion comes from having seen Devil Wears Prada on cable last week.

# FYI – the white house website is proving live streaming video of the arrivals and State Dinner. Next up – exchange of toasts about 815pm/ET.

# Mrs. Obama looked elegant in a silver strapless gown, with a chiffon wrap around her arms. The Pres. was wearing a black tuxedo.

# They all shook hands, posed a moment for the photographers then turned and entered the state floor of the WH.

# Food Fit for a President: a great compilation of presidential menus on the CBS News website at http://bit.ly/6J8K5i

# I don’t mind not being invited to tonight’s State Dinner – since it’s meat loaf night at my house.

# @aimeeb262 as a kid, i was far more familiar with rugula than arugula.

# @mitchellreports thanks andrea. i was a guest once during Clinton. Suspect you’ve been to more than most presidents.

# @roykissel sporks? at a state dinner? good tip. will pass it along to the Social Secretary.

# @mj_santos it’s not meant to be rude – but US reporters have to pursue the news of the day – and today’s it’s Afghanistan.

# Will you be at tonight’s State Dinner – or at home doing meat loaf night? My webpiece at: http://bit.ly/8Kzhx5

# Singh made an “official visit” during the Bush years – a notch below State Visit on the protocol scoreboard – & got an “official” dinner.

# Technically, State Visits are meant for Chiefs of State. Singh, as PM, is a head of government. But nobody gets sued. about 22 hours ago from web