When Do We Start Holding the Trump Administration Accountable for This Disastrous Presidency?
Opinion

When Do We Start Holding Trump Administration Officials Accountable for This Disastrous Presidency? 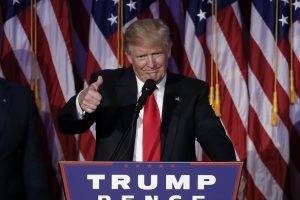 In the past six months of Donald Trump‘s presidency, anyone could have predicted that with appointments like white nationalist Steve Bannon and woefully ignorant Betsy DeVos, the presidency would be an unmitigated disaster. From legislative failure after legislative failure to bipartisan moral bankruptcy to constant, unsurprising but nevertheless, unsettling immaturity from a man our nation’s children are supposed to see as a role model, Donald Trump is shocking even those who expected the worst with the events of the past couple weeks.

On Wednesday, President Trump announced a ban on transgender people in the military citing budgetary concerns, despite the reality that his routine trips to Mar-a-Lago cost around triple the costs of medical care for trans people in the military. Like his shameful comments about Mika Brzezinski, his comparison of Mexican immigrants to animals, and his casual comment that Obamacare should just be allowed to “fail,” his recent rollback of trans people’s rights despite campaign promises to protect the LGBT community, leaves many Republicans in a tough place.

How many times are respected Republicans going to find themselves distancing themselves from the latest Trump bombshell, pulling a Paul Ryan and saying they “obviously” disagree but cutting off right there without actually taking any action? On the campaign trail, former President Obama asked Republican leaders how many times they were going to express disapproval with Trump’s comments and behavior before finally, formally doing something to actually stop the cycle of constant indecency and incompetence?

There’s two obvious dilemmas for a lot of Republicans when it comes to standing up to Trump. The first is that it’s difficult to say what they can actually do short of impeaching him — he’s their president, which takes me to their second dilemma — they all benefit from his presidency, and so it’s difficult for them to justify sabotaging it.

Trump’s administration is ridden with zealots and extremists; it’s no secret Steve Bannon is just as concerning to Democrats as he is to many traditional conservatives. But it’s also served by polished professionals like secretary of state Rex Tillerson, who clarified on Wednesday that contrary to rumors that he would resign over frustration with the administration, he intends to stay.

There’s Jared Kushner and Ivanka Trump, who are happy to claim to be advocates for equality and social justice, but as we’ve seen with the Paris climate accords and most recently, Trump’s anti-trans military ban, they are enabling someone taking dangerous, scary and radical positions. The unelected D.C. power couple is reportedly done doing anything to even try to back LGBT rights, going forward, conceding that the issue is a lost cause under this president.

And then, of course, there are the former Goldman Sachs executives swirling around his administration like bees over a honey pot.

The professional, polished and educated members of the Trump administration are likely just as frustrated with much of what Trump’s been saying and doing as we all are, but they directly benefit from Trump being in power, and out of pure selfishness, apparently are not going to stand in his way or hold him accountable. At least not yet. And they’ll never have to suffer the consequences of Trump’s incompetence and intolerance the way so many everyday Americans will.

The bottom line is that it is time for the adults in the administration to take a stand and end their shameful role in what will likely go down in history as the worst President and Presidency. . .ever. Sadly, if we’re waiting for the many decent, traditional Republicans out there to finally take a stand beyond sharp reprovals, if we’re waiting for them to quit or pull their endorsements of Trump or announce that they will no longer legislatively support his agenda, it may be too long a wait.

So what can concerned Americans across all party lines do short of actually showing up to vote? Fortunately for us, Trump’s administration is laden with people with all kinds of outside business ties. For example, Ivanka Trump has her Kellyanne Conway-endorsed fashion line that we should all be boycotting.

Maybe the good Christian patrons of the Dick and Betsy Foundation can find some other charity to financially support — maybe one that isn’t linked to such a morally repugnant presidential administration? Maybe find some other multibillion dollar real estate developer to patronize that isn’t Kushner Companies?

The bottomline is, if you’re disappointed and frustrated with anything anyone in the Trump administration is saying and doing, actually, actively do something about it — because it appears its going to take a push to bring any of the sensible ones back to reality. Punish those who are enabling him and punish those who are being complicit. The rich and powerful can turn their backs on Jared and Ivanka when they attend fancy parties. Goldman Sachs should pronounce that they won’t take back any of their former employees who worked in this horrible administration. Plenty of people in the Trump administration, plenty of Republicans in Congress, know there’s something very wrong with what’s going on, but are going to do nothing to address this without a push.

The time for them to hold Trump accountable for his actions was long ago. Now it’s our turn.