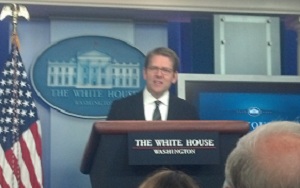 At today’s White House briefing, Press Secretary Jay Carney fielded a flurry of questions about the current conflict between Republican presidential candidate Mitt Romney and Senate Majority Leader Harry Reid (D-NV) over Romney’s tax returns. Reporters repeatedly tried to draw a White House denunciation of Reid’s unsubstantiated accusation that Romney enjoyed a tax-free decade, and of comments by House Minority Leader Nancy Pelosi (D-CA). Carney’s response was that both leaders speak for themselves, and that Romney should release his tax returns.

Last week, Sen. Harry Reid created a stir when he told The Huffington Post that he had heard from a Bain Capital investor that Mitt Romney had paid no taxes for ten years, but refused to reveal the source of that information (Reid also made a regrettable and vicious remark about Romney being an embarrassment to his late father). Rather than apologize or backtrack, Sen. Reid has spent the ensuing days repeating the attack, even on the floor of the US Senate.

Reid’s move, propriety aside, has been hailed by many liberals as some sort of media masterstroke, keeping the story of Romney’s refusal to meet the standard of the dozen years of tax returns that George Romney set in 1968, or even to release more than two years. The political value of Reid’s assault is debatable, though. While it has turned up the heat on the story, it has also introduced an element of distraction, but more to the point, the tax return story didn’t really need the help. It remains to be seen if Reid’s deployment of this tactic will pay off in the end, compared to the doors it opens for Republicans to try something similar in the future.

One benefit of Reid’s gambit is that it effectively pre-neutralizes any response from the Mitt Romney campaign, because however outrageous people find Reid’s accusation, responding to it with anything but a stack of tax returns only serves to remind people of the more substantive outrage that Romney is guilty of. That’s why it was so baffling when Romney decided to respond to Reid by saying “Put up or shut up.” Twice. That’s like a guy who had an unfortunate scrotal-woodchipper accident telling someone else to grow a pair; you can still burn people, just not with that expression.

The Romney campaign’s best response to date, even of it was more overwrought than an iron doily, was Eric Fehrnstrom’s “Have you no decency, sir?” bit. It didn’t help much, but it also didn’t hurt.

But there was something else in Gov. Romney’s response that most of the media missed out on. Both of the times he told Harry Reid to “put up or shut up,” Romney also accused the White House of being the source of Reid’s accusation, also without evidence. For whatever reason, the press has ignored this, despite the fact that it’s every bit as outrageous as what Reid did, and then some. Once again, Romney seems to be displaying his faulty grasp of the goose/gander equation, but he was actually making a shrewd ploy to blunt the impact of the story in the only way he could.

As long as Mitt Romney is trading body blows with Harry Reid, he cannot win. Reid’s not running for president, and Romney is just punching down. His only chance is to draw President Obama into the fight, and make it about something else, but the White House and the Obama campaign haven’t made a whisper about Romney’s accusations, even though a lesser candidate might jump at the chance to score some cheap outrage points.

Romney’s problem is that he decided to push in a lot of chips on a crummy hand, rather than fold them months ago, cut his losses, and get new cards. If he had released his tax returns in January, when he was roundly booed by a Republican debate audience, the story would likely be cold now (unless there turned out to be something earth-shattering, or even disqualifying, in those returns). Now, he can’t fold, and all Team Obama has to do is sit there and watch Reid clean Romney out.