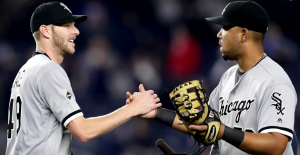 For the first time since the bizarre incident on Saturday in which he shredded a clubhouse full of jerseys, Chicago White Sox pitcher Chris Sale is speaking out, and is standing by his actions.

In an interview Monday with MLB.com, the Sox ace defended his behavior, saying that the throwback uniforms his team was scheduled to wear hampered his mechanics and would’ve impacted his performance.

The pitcher denied that his objections to the threads were fashion-related, saying that it was completely about his team’s on-field performance.

When I saw that there was something in the way of that 100 percent winning mentality, I had an issue. I tried to bring it up and say, “Hey listen, these are my thoughts and concerns,” and they got pushed away because of the business deal that was set in place. I’ll never understand why we need to do something on the business side on the field that might impede us winning a game.

[The ’76 uniforms] are uncomfortable and unorthodox. I didn’t want to go out there and not be at the top of my game in every aspect that I need to be in. Not only that, but I didn’t want anything to alter my mechanics. … There’s a lot of different things that went into it. Looking bad had absolutely zero to do with it. Nothing.

The pitcher was suspended for five games over the incident, and on Monday he apologized to the fans as well as his teammates for not being able to perform. Interestingly, however, Sale criticized White Sox manager Robin Ventura for failing to stand behind his players.

“Robin is the one who has to fight for us in that department,” Sale said. “If the players don’t feel comfortable 100 percent about what we are doing to win the game, and we have an easy fix — it was as easy as hanging up another jersey and everyone was fine. For them to put business first over winning, that’s when I lost it.”

The MLB trade deadline is on Monday, and Sale — who’s in the midst of an outstanding 14-3 season — is widely rumored to be on the block.