Who Said It? “Screw Bill Clinton — He’s A Misogynistic Sociopath!”

Who Said It? “Screw Bill Clinton — He’s A Misogynistic Sociopath!” 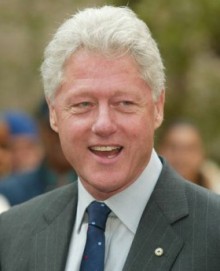 Welcome to a fun new feature at Mediaite called “Who Said It?” where we find fun, funny and semi-outlandish stuff in the media and make you guess who made that claim. We’ll give you a few clues, and then reveal the identity of the speaker. When in doubt, pick Glenn Beck.

In today’s installment: “Screw Bill Clinton – He’s A Misogynistic Sociopath!” Who Said It? This person is a New York media boldfaced name from the world of print, who recently left a high-profile position but did so with the comfort of seeing a just-released book hit the bestseller list. This person is known for running equally with the glitterati (think: Page Six) and literati (think: The Magician).This person has been known to be a little fabulous him/herself; he/she has what the kids call “It.” Do you know who it is? Find out after the jump!