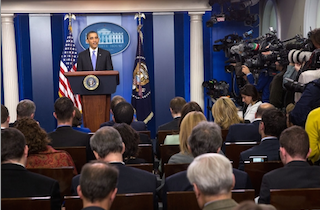 The announcement that White House Press Secretary Jay Carney will be stepping down after three years on the job came as a surprise to most of the media world Friday, including the men and women (mostly men) who make up the White House press corps. Here’s how the people who spend the most time with Carney on a daily basis are reacting to the big news.

Fox News’ Ed Henry was short and sweet on Twitter:

Earnest in briefing room listening to POTUS announcement that he is new WH Press Secretary. pic.twitter.com/eHaPpa6ilI

Whoa! @BarackObama says Jay Carney is stepping down as @PressSec who he says "has become one of my closest friends" pic.twitter.com/SvgRonx1mu

Later, Karl told TVNewser that he would, in fact, miss Carney:

“Will I miss Jay? Of course. He’s been a spirited advocate for the President who was never afraid to take the tough questions. To borrow one of Jay’s favorite phrases, ‘I appreciate that.’ And as heated as it sometimes got in the briefing room, it was never personal. Jay is a pro.”

Farewell to @PressSec who now goes the way of @PressSecBeard

CNN’s Brianna Keilar summed up the day that has included the resignation of VA Secretary Eric Shinseki along with that of Carney this way: