Everything You Need to Know About Josh Earnest, Jay Carney’s Replacement 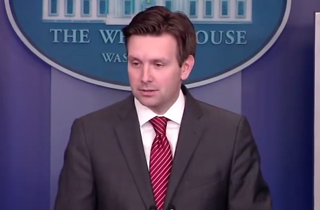 Minutes ago, Jay Carney announced that he was stepping down as the Press Secretary for the Obama Administration sometime in June, and alluded to a summer of hanging out with his kids. Meanwhile, someone has to field questions and struggle to articulate the administration’s policy points in soundbite-worthy terms.

So who’s the new schoolyard wimp that all the bully journalists pick on? It’s White House Special Assistant to the President, Principal Deputy Press Secretary, and Chief of Staff Josh Earnest! Sure, he has the perfect name to be a press secretary for the leader of the free world (seriously, “Earnest”), but can he do it? Let’s learn what Josh Earnest’s deal is:

QUICK BIO, GO: Josh is from Kansas City, Mo., and went to the Barstow School on a scholarship before attending Rice University to study political science. He loves baseball (his dad is the athletic director of a nearby school), he’s married to another government spokesman (Natalie Wyeth, a Treasury flack whom he wed in 2012), and, according to Obama, he has the voice of an angel.

SO WHY IS HE THE NEW FLACK MASTER? Earnest’s certainly earned his new position, both due to his longtime association with the Obama administration and his long, long resume of working on political campaigns all over the country: he’s put in time as a communications advisor for former NYC mayor Michael Bloomberg and a storied group of Democratic superstars including Houston Mayor Lee Brown, the Democratic National Committee, and, oddly, a short period with then-Congressman Marion Barry. He then landed a job with the 2008 Obama campaign as the Iowa communications director, and, as a profile of him in McClatchy points out, the rest was history.

NO, SERIOUSLY, EXPLAIN HIS PRIOR JOB: Oh, at the White House? Basically, prior to him becoming the Press Secretary, Earnest would help Carney prep for the daily White House press briefings, monitor all the news chatter, and, occasionally, step in to conduct the daily briefing himself. Check him out in action:

In addition, he runs “West Wing Week,” a webseries where he summarizes everything that’s happened in the world of the White House on a weekly basis, from new policy initiatives, to public appearances, to Joe Biden’s expressions of wonderment at the simple beauty of life:

OKAY, IMPORTANT QUESTION: IS HE A PUSHY D.C. TYPE? Apparently not, according to people who know him:

He’s definitely the quintessential coach’s son,” said Adam Moore, a childhood friend and classmate at Barstow who’s now a lawyer and partner at Shook, Hardy & Bacon. “He has probably the best baseline jumper you’ve ever seen from the left-hand corner baseline. He could hit that three-pointer every time.”

Moore attributes some of his friend’s success to his Midwestern upbringing: “You always know where you stand with him.”

Carney agreed: “His time in politics has made him smart, but not cynical. Maybe that’s because of his K.C. roots.”

His affability doesn’t stop him from being known as the “bad cop” in the office, however, and White House officials note that he doesn’t have trouble being tough with reporters.

And he has a lovely speaking voice. Yeah, we know. It’s like this man was genetically engineered to be a White House spokesman or something.