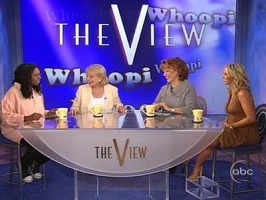 The internet is abuzz about a comment that Whoopi Goldberg made on ABC’s “The View” yesterday. The quote that’s getting all of the play is this out-of-context bit:

“I know it wasn’t rape-rape. It was something else but I don’t believe it was rape-rape. He went to jail and and when they let him out he was like ‘You know what, this guy’s going to give me a hundred years in jail I’m not staying,’ so that’s why he left.”

I mention the context for two reasons. First, this quote gives the impression that Whoopi was trying to create different categories of the rape experience, when she was actually trying to zero in on the correct legal term for the crime Polanski plead guilty to.

Secondly, the larger context for this quote is much, much worse than that.

Here’s the clip with the “money quote” in it: (Please excuse the video quality)

What I find much more disturbing is that, in that clip and another one that’s posted at Jezebel, the ladies of The View engage in some terrifying “debate” about what happened to then-13-year-old Samantha Geimer. Whoopi floats the notion that rape “wasn’t the allegation,” and that the victim “was aware,” and Melissa Gilbert thinks it makes a difference that “Mom was in the building.”

What the EFF? I hate to even point out the sickeningly obvious here. First of all, “rape-rape” was the allegation. Samantha Geimer testified that she told Polanski “No!” While Polanski denies this, he loses a couple of credibility points by drugging and sodomizing a 13 year old girl. I’d say she gets the benefit of the doubt here.

Notwithstanding that, though, is that the standard of consent now, “She was aware?” Keep an eye on your drinks, ladies, because in Whoopi’s world, the right dose of rohypnol will leave you just conscious enough to have deserved it.

Finally, they debate whether Samantha’s mother should have assumed a 44 year old man would want to have sex with her 13 year old daughter, and poo-poo that prudish “age of consent” concept we have here in the States.

This goes to the heart of the question of whether Polanski should now be punished. Whatever you think of him as a director, or of the tribulations he has faced, are you prepared, as some of the View crew are, to say that this is somehow OK?