Why David Keene Threatened To Punch Me At WCPAC
exclusive

Why David Keene Threatened To Punch Me At WCPAC 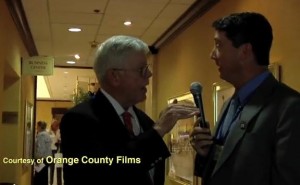 I have a really hard time with people who claim to be crusaders for the conservative cause but who are really only in it for either personal and/or economic aggrandizement. In my media career I have found that vast majorities of the elite among conservative politicians and media stars fit into this pathetic category. One of the most aggravating aspects of the heat I have taken over the past year for my efforts to shine light on the injustice of the media coverage of the 2008 election is that I often get accused of being one of those who only craves personal attention and has less than pure motives (which considering I was a long time radio talk show host, a career infested with such scoundrels, I can actually begrudgingly understand).

To me, now more than ever, the conservative movement must purge itself of those in its “leadership” who are not worthy of the cause they claim to champion. Over the past year I have begun to suspect that David Keene, the head of the American Conservative Union and the Chairman of CPAC (the largest annual gathering of conservatives) may fit into this category.

I have spoken at the last three CPACs and it always seemed pretty obvious to me that the vast majority of speaking slots and agenda items were determined by factors that had nothing to do with relevance, talent, worthiness, or benefit to the movement. Instead it was clear that personal relationships and donations/sponsorships ruled the day. Human nature being what it is, I hardly found this surprising and mostly put it in the “annoying” category.

That began to change earlier this year when, because I was promoting my just released documentary “Media Malpractice,” I was a co-sponsor of CPAC. As part of that designation I flew from Los Angles to Washington twice to attend planning meetings (including once the day after my grandfather’s funeral). At both of these affairs I raised the issue of “sellouts” to the movement being given prime speaking roles and there seemed to be general agreement that this was a bad idea. At one meeting David Keene clearly indicated to the group that this would be taken care of. However, when the schedule came out, the names I had specifically mentioned had indeed been given plum roles and, while I can’t prove it, all signs point to economic reasons motivating these decisions to reward people who are clearly bad for the cause.

I will fully acknowledge that I felt badly mistreated by the selection process, but that did not influence my perception of that procedure, but rather only made it easier for to see and voice what I have witnessed about its obvious flaws. But the ultimate tipping point for me came a few months ago when David Keene made some statements about Sarah Palin after her resignation that sounded like they could have easily come from Keith Olbermann and not an extremely influential conservative leader.

Keene claimed she was “whining” about media coverage, “bitter,” “resentful,” had “bailed out” on her governorship, and was not ready for the “major leagues.” He also mocked her inability to appear at this year’s CPAC (not that I am implying this had anything to do with his motivation!).

As someone who has dedicated their lives over the past year to trying to correct the historical record about Sarah Palin, almost nothing infuriates me more than having a “conservative’ buy into the media lies about her, especially when they don’t seem to know all the basic facts. But when that person is the head of the ACU and CPAC it is particularly maddening because Palin bashing from someone like that essentially provides cover for anyone else who wants to take an unfair shot at her. For all intents and purposes Keene was acting as an accomplice, after the fact, for a public lynching.

Then I learned of a couple of extreme ethical lapses by Keene in the realm of his personal political allegiances and his political lobbying firm.

Politico reported that it certainly appeared as if the ACU (through a letter from Keene deputy Dennis Whitfield, with whom I had met in 2008 about potentially funding part of “Media Malpractice”) was offering Federal Express Keene’s op-ed support on a legislative issue if they paid ACU a couple of million dollars.

I also became aware of a 2003 National Review article (subtitled, “The ACU Chairman Sells Out”) which focused on his support for then liberal Republican Arlen Specter who was long-time Keene “friend” and, coincidently I am sure, the head of a senate committee in front of which Keene’s lobbying firm regularly does business.

It also turns out that Keene gave Specter (now a key Democrat) $2,000 as late as the 2008 election cycle. For sake of complete disclosure, I have been very open about having given money to a Democratic friend currently in congress, but I am not the head of the American Conservative Union and I have been very clear that my “support” was not an attempt to back up my friend’s non-existent conservative credentials.

So, with this as the backdrop, I went to Western CPAC in Newport Beach this past weekend as a scheduled speaker and an exhibitor. I also went with the full intention of getting David Keene to address at least some of these issues.

It became clear to me that the best way to do this was, rather than going way off the topic of my speaking panel (I was there to talk about my arrest at USC’s Katie Couric journalism award ceremony) and making an unnecessary scene that probably wouldn’t even make sense, was to get an interview with David Keene. Keene agreed to do a sit-down interview and the guys from Orange County Films (who had videotaped the Couric episode) volunteered to shoot whatever happened that day.

Here is the three part video of what transpired, which was edited by Orange County Films.

The two men not clearly identified in this video are Jon Fleischman from flashreport.org and Gary Kreep who moderated the panel I was supposed to be on. Gary, I later found out, is a big-time “Birther.” So Birthers were more welcome to appear at WCPAC than people who ask David Keene tough questions in an interview to which he willing agreed!

For the record, contrary to what WCPAC claims here, I had absolutely no intention of “disrupting” the panel I was scheduled to be on. All I wanted to do was to get David Keene to explain himself, which I had already tried to do. I didn’t make the “scene,” David Keene did.

I am sure that there will be those who will wrongly think that I did this for personal attention. Those that know anything about me understand this is not the case. I will gain absolutely nothing from this and will likely lose quite a bit. My only goal was to try to shine light on the issue of whether David Keene as individual should be a leader in the conservative movement as well as this broader issue of far too many members of the conservative establishment being motivated by the wrong factors.

One of the reasons that I did this was that I am well aware that I am the only one who would be willing and able (or stupid enough) to do something like this to expose apparent frauds like David Keene and CPAC. I am also very well aware that I will likely fail in this attempt for some accountability.

This will largely be because many “conservative” commentators (some of whom personally witnessed at least part of what happened), who in a semi-rational world would jump all over this story, I am sure will turn the other way so as to not jeopardize their relationship with CPAC and their precious speaking spots. Ironically, this reality is a large part of how this situation was created to begin with. The conservative media protects a guy like Keene out of fear and then he actually begins to rationalize that he has done nothing wrong because, after all, almost no one has called him on any of it and there have been no repercussions at all.

This entire episode has greatly furthered my already strongly held belief that the vast majority of the conservative “movement” is “led” by fakes, flakes, freaks, frauds, phonies and sell outs who are far more interested in protecting their own little thiefdoms than promoting the cause. That may not surprise veterans of the political process and human nature, but I would still like to believe that the principles of freedom, liberty, limited government, national security and the constitution deserve much better than that.

There are many reasons why conservatism finds itself clinging to a quickly dying minority in America, and this issue is right at the top of the list. If I have given up my career in the movement to spark a change, it will be well worth it. Regardless, I know that, while I am hardly perfect, I have fought a just fight and always did what I thought was right.

In 2008, John Ziegler wrote, directed and produced the documentary “Blocking the Path to 9/11” and created www.HowObamaGotElected.com as a precursor to his next film, “Media Malpractice… How Obama Got Elected,” which came out in early 2009 and screened in over 20 theaters. A trailer video for that documentary has been viewed by at least 2.3 million people on You Tube.