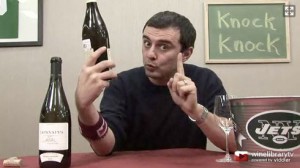 Wine video blogger/social media maven/author/New York Jets fanatic Gary Vaynerchuk is all about transparency. That’s why he’s such a proponent of communicating via Twitter – he can get called out on anything and everything he says.

So when he tweets something crazy – like he did in promising free shipping for an entire year from his new venture, Gourmet Library, if the Jets won Sunday – he’s not saying it into a vacuum. (Gourmet Library was inspired by Wine Library, Vaynerchuk’s wine retail business originally started by his father.) And when the Jets did win, ending the Indianapolis Colts’ undefeated season, he was giddy with excitement over his beloved team. He also, though, faced hurting either his credibility or bottom line – and stuck to the free shipping guarantee, leading him to tweet, “The CFO is not happy.”

We couldn’t resist asking Vaynerchuk about this highly unusual chain of events, none of which would have been possible without the rise of social media. He admitted to Mediaite that the free shipping idea was “95%” spur of the moment, but also emphasized that all his ideas are at least partly premeditated: “I brainstorm all the time with myself and say, ‘Well, what if one day this happens?'”

The financial effect is about what one would expect – shipping for the year is serious money. “We lost over $900 already today, and 80% [of customers] don’t even have their [free shipping] codes yet. This is going to get ugly,” Vaynerchuk said, though ever the optimist, he sees the silver lining: “This is a new venture…I’m excited about it and this will build a following.”

All business matters, though, took a backseat to the game. This is a pretty good summation of the general state of his tweets during and after the Jets-Colts game, as is this postgame reaction. And this one, from later Sunday night. Or this one. Or this one, from Monday morning. You get the idea, but to paint a clearer picture, this was Vaynerchuk’s response when we asked if he’d change anything about Sunday: “NO CHANCE.”