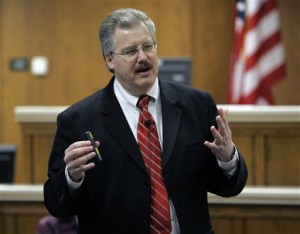 Yet that is what happened in Calumet County, Wisconsin, when Kenneth Kratz, the District Attorney who has been a prosecutor for all of 25 years, took a shine to Stephanie Van Groll, the defendant in a domestic abuse case who is 26-years-old.

“The 26-year-old woman complained last year to police after receiving 30 texts from Calumet County District Attorney Kenneth Kratz in three days, according to the report obtained by The Associated Press.

‘Are you the kind of girl that likes secret contact with an older married elected DA … the riskier the better?’ Kratz, 50, wrote in a message to Stephanie Van Groll in October 2009. In another, he wrote: ‘I would not expect you to be the other woman. I would want you to be so hot and treat me so well that you’d be THE woman! R U that good?’

Kratz was prosecuting Van Groll’s ex-boyfriend on charges he nearly choked her to death last year. He also was veteran chair of the Wisconsin Crime Victims’ Rights Board, a quasi-judicial agency that can reprimand judges, prosecutors and police officers who mistreat crime victims.”

At first, Kratz claimed she politely declined Kratz’s text advances, until he became more persistent and “vulgar.” One text read, “I’m serious! I’m the atty. I have the $350,000 house. I have the 6-figure career. You may be the tall, young, hot nymph, but I am the prize!” This continued for three days until she went to the police with a complaint, telling them that she was worried that, if she didn’t comply, Kratz would drop the charges against her boyfriend. Kratz then removed himself from the case, however, he was not charged with anything for the text messages. Van Groll was told this was because he had done nothing “criminally wrong.”

Kratz is still the “top prosecutor based in Chilton.” Earlier this week, he was interviewed by the Associated Press who had obtained the text messages. You can read more about the “combative interview” here. While the circumstances are incredible enough, the article is fascinating. Enjoy reading between the lines of Ryan J. Foley’s writing. I get the strong feeling that he wasn’t too impressed with Kratz during their talk which, he writes, ended when the DA “slammed the door to his office.”