And The Award For Most Embarrassing Self-Own of the Robert Mueller Hearing Goes To: Eric Swalwell 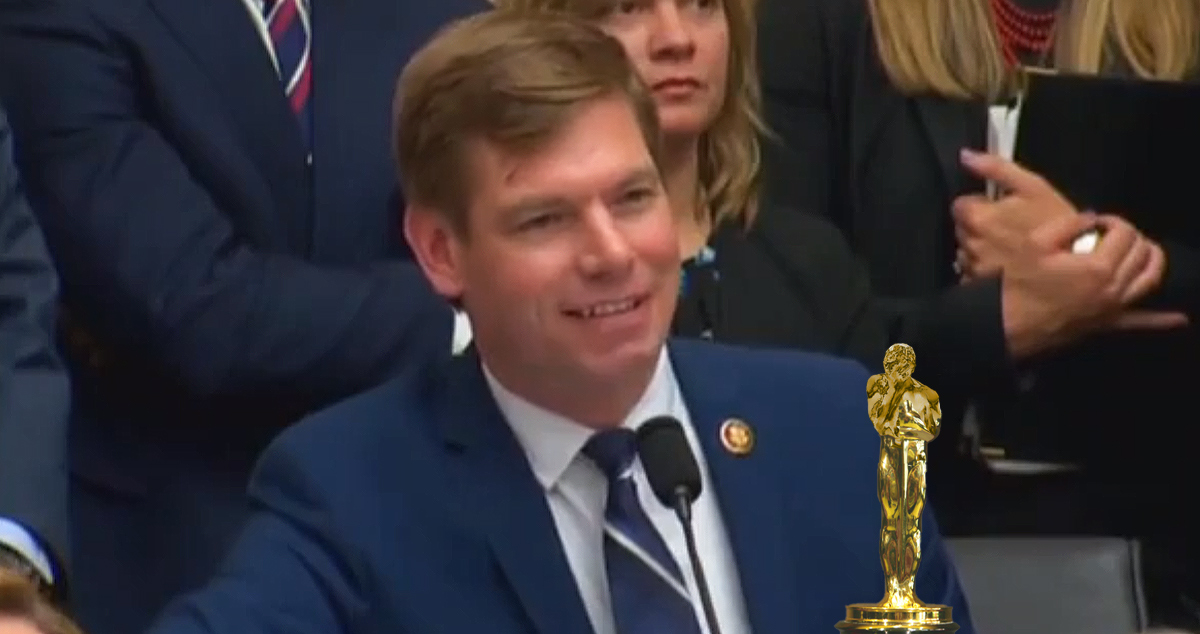 The coveted “most embarrassing self-own” award from Wednesday’s committee hearing definitely goes to Rep. Eric Swalwell of California, for his sheer determination in attempting to complete his planned viral moment despite getting the exact wrong answer from Robert Mueller.

Like every politician in the room (universe), Swalwell had collusions of grandeur going into this hearing. His hoped-for viral moment centered around his dramatic retelling of the story of the letter signed by a few hundred former prosecutors stating that, were Trump not president, the findings in the Mueller report would have resulted in an indictment for obstruction of justice.

Swalwell was clearly expecting a cooperative Mueller to take the opportunity to let that letter say for him what he couldn’t say for himself, and by extension for Swalwell to say it for him, resulting in a made-for-TV moment.

It didn’t go that way. (Video below.)

Things went the wrong direction right from the get. Swalwell theatrically described the letter and the combined “twelve THOUSAND years of federal service, and said “are you familiar with that letter?”

Undeterred, for some reason, Swalwell continued the show.

“And some of the individuals who signed that letter, the statement of former prosecutors, are people you worked with, is that right?” he asked.

With utter disregard for the well-being of red flags everywhere, Swalwell pressed on.

“People that you respect?” he asked, a hint of desperation creeping across his elfin features.

“And in that letter they said all of this conduct trying to control and impede the investigation against the president by leveraging his authority over others is similar to conduct we have seen charged against other public officials and people in powerful positions,” said in-for-a-penny-in-for-a-pound Swalwell. “Are they wrong?”

“They have a different case,” said Mueller, in the second most underwhelming reply in the history of hot viral congressional testimony moments.

Swalwell had one last chance to bail out, at that moment, but whether through a stubborn inability to let go of his daydreams about the way this might have gone, or through a flat-out obliviousness to how badly his plan was falling apart, he went for the big Hollywood moment anyway, all instinct, caution, and reason to the wind.

Though it didn’t remotely follow logically from or flow conversationally from the question and answer up to that point, with a grin, as if everything had gone swimming so far, Swalwell asked “Do you want to sign that letter, director Mueller?”

“Uh” said Mueller, looking down for a moment before the killing blow.

“They have a different case,” he said, in the single most underwhelming reply in the history of hot viral congressional testimony moments.

Swalwell thanked Mueller for his service and mercifully passed the baton to someone else.

For all that, and a lifetime of achievement in the genre, Swalwell wins the coveted Self-Ownie. Congratulations, Congressman. Watch the clip below for the shining moment, courtesy of CNN.

By the way, don’t feel too bad for Swalwell. While his own Spartacus dreams may have been dashed, at least he can say he also sort of ran for president a bit.