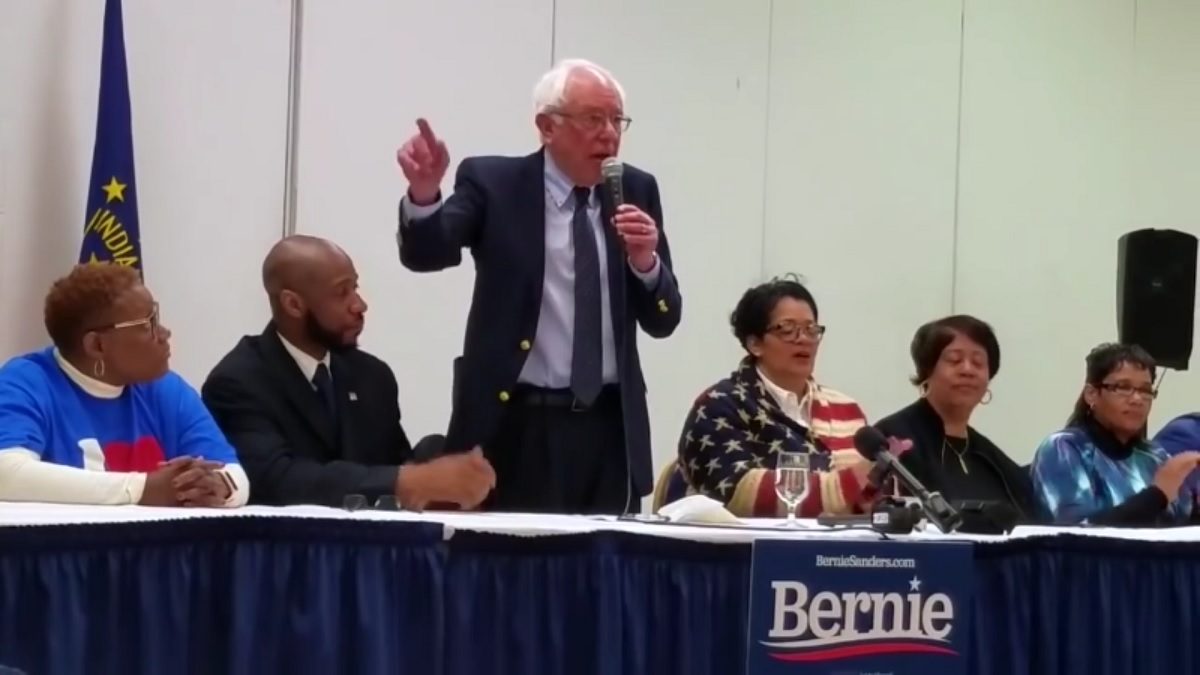 On Sunday, The New York Times published a letter that Sanders wrote to “members of the Board of the Center for American Progress and CAP Action Fund,” which funds ThinkProgress, complaining about an article that focused on the wealth he has accrued from book sales, as well as articles about Senators Elizabeth Warren (D-MA) and Cory Booker (D-NJ).

He concluded the letter by promising to marshal his supporters against the liberal think tank, and declared “Should your actions evolve in the coming months, I am happy to reconsider what kind of partnership we can have.”

But as ThinkProgress notes on its website, and current Sanders campaign manager Faiz Shakir once wrote about at length on the site, TP is “an editorially independent project of the Center for American Progress Action Fund.”

This was also the gist of CAP’s response to Sanders’ letter, which said, in part, “We cannot and will not muzzle ThinkProgress, an editorially independent journalistic enterprise, and we believe it’s wrong for any political leader to demand it do so.”

Sanders’ letter to the think tank is being characterized in the press as a “warning shot to the Democratic establishment,” which is a shocking thing for a member of the press to say about such an egregious attack on an editorially independent outlet. Coverage of the letter has stressed CAP’s links with allies of Hillary Clinton.

That focus could be a “tell” for what Sanders is actually playing at. He couldn’t possibly have thought that by releasing this letter publicly, he would have persuaded ThinkProgress to alter its coverage. It reads more as an attempt to reconstruct the Democratic Hillary Establishment Bogeyman that he used to embitter his supporters in 2016.

And while we’re giving Bernie credit for cleverness, he also pulled off the neat trick of highlighting Booker’s issues with the pharmaceutical industry and Warren’s DNA controversy even as he was concern-trolling about them.

But I think the root of this episode is the criticism itself, which is pretty silly. Sanders is hurt by what he calls an accusation of “hypocrisy,” an accusation that is itself entirely unpersuasive. As someone who doesn’t think Sanders should be president, and finds plenty of legitimate reasons to criticize Sanders (as well as to praise him), the fact that Bernie Sanders earned millions writing books while demonizing millionaires and billionaires, and criticizing Hillary Clinton for earning money making speeches, does not faze me at all.

The crux of Bernie’s critique is not the money itself, but of the influence of that money. If I were in a rebutting mood, I might push back against the Bernie hypocrisy charge in much the same way that Hillary Clinton did during a debate in 2016. Sanders was asked by moderator Dana Bash to give just one example of money influencing a decision that Clinton made as a senator.

He could not, and Clinton simply observed “Well, you can tell, Dana, he cannot come up with any example, because there is no example.”

In Sanders’ case, you could reasonably ask how the money he gets from people who read his books is supposedly influencing him. Name one decision he’s made as a senator that shows he’s in the pocket of Big Man Bun.

But hypocrisy wasn’t the charge that ThinkProgress leveled in the materials Sanders referenced in his letter. The article in question, by ThinkProgress’ Jessica Goldstein, and the companion video, make the point that Sanders’ newfound wealth is “very off-brand and embarrassing,” a much more persuasive observation, and a fair one.

It’s a point that has been made much more effectively by Sanders himself than by the writers at ThinkProgress, or anywhere else. It is the most reasonable explanation for the fact that Sanders has conspicuously resisted releasing his tax returns for years, despite the political damage it did to him (he has since promised to release them today).

But it is also evident in the defensive and belligerent manner in which Sanders deals with questions about his wealth.

“If you write a best-selling book, you can be a millionaire, too,” Sanders told the New York Times when asked about his wealth.

“I didn’t know that it was a crime to write a good book, which turned out to be a best-seller,” Sanders said at a town hall in Gary, Indiana when reporter Francesca Chambers asked him if his millionaire status “conflicts” with his message. “I don’t apologize for writing a book that was No. 3 on the New York Times best-seller,” he added, when nobody had asked him to apologize.

These responses served to drown out what was a fairly effective rebuttal that followed, in which Sanders noted his consistent belief in a “progressive tax system which demands that the wealthiest people in this country finally start paying their fair share in taxes,” including himself.

Whatever the reason, Sanders is obviously free to rebut criticism in any way he sees fit, even if it makes him seem like a giant diaper-baby. But imagine for a moment that any other candidate acted in this manner, bullying and threatening the financial backers of an independent journalist over mildly critical coverage, or even heavily-critical coverage.

Sanders’ attempt to chill the free speech of these writers is unconscionable, and the mainstream press should call him out for it, instead of abetting his anti-“establishment” spin.