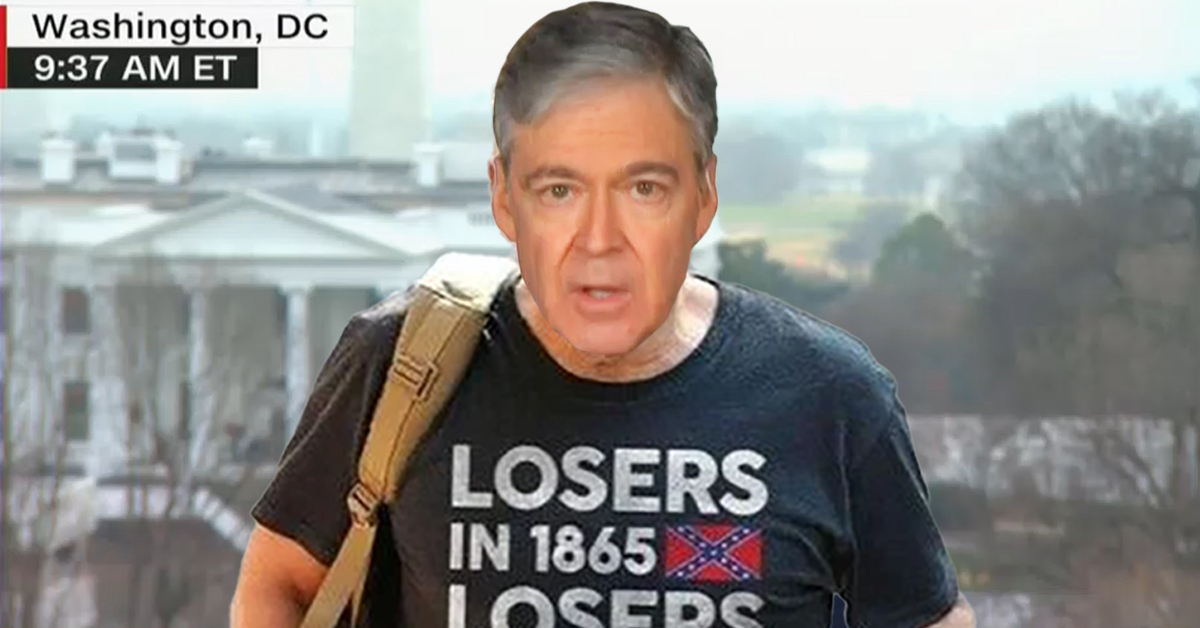 CNN’s John Harwood enjoys tweets comparing Republicans to the Confederacy, to Nazis, or to whatever other ghoul or specter of the past that can be mustered to demonize that half of the voting population, and he wants you to know that. It’s all part of his role as a responsible and objective journalist.

Harwood, formerly of CNBC, has an extensive history of extremely partisan commentary both on social media and on-air that’s almost spectacular in its scope and, were he a more successful or famous person, would certainly be the stuff of frequent trending topics and outrage. But not everyone can be Jim Acosta.

Yes yes, we know that being an objective journalist doesn’t have to mean being unbiased. (Or reverse that if you prefer the terminology the other way around.) Journalists can have a world view and also do their jobs fairly and professionally. You can be a Democrat and a good journalist. Hypothetically. In theory. So the saying goes.

But to misquote another famous saying: “I shall not today attempt further to define the kinds of material I understand to be embraced within that shorthand description [‘hard-core journalism’], and perhaps I could never succeed in intelligibly doing so. But I know it when I see it, and the reporting involved in this case is not that.”

Last week, Harwood tweeted one word of commentary along with his retweet of a now-deleted doctored image of George Clooney wearing a t-shirt. (Yes, it’s an obvious photoshop.) 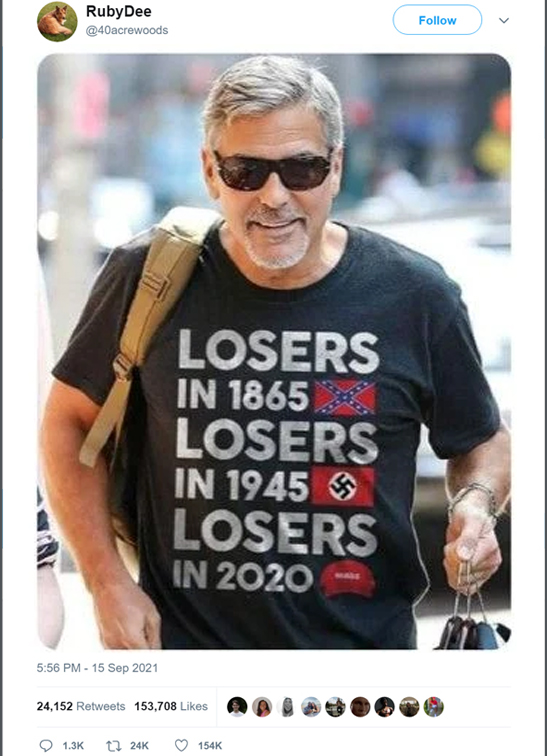 Harwood is being “cute,” he thinks. Clever. I can imagine how immensely pleased he was with the comment and with the reaction. I have written before about this peculiar-to-the-left onanism in which one adopts a deliberately fake and aghast air of surprise. “Whaaat? ME, BIASED? But friend, it IS accurate. Did those things not HAPPEN?”

Cloying is a good descriptor for the smarmy emanation from such performance art. Is it not accurate that the Nazis lost? That the Confederacy lost? That MAGA lost? BIG GRIN.

We could go over why the original intent itself is childish and exaggerated, but that is not the case before this court, so to speak. It’s Harwood’s sharing that’s the thing.

Harwood is a reporter. He is not a columnist or an opinion show host, and that distinction matters a lot at CNN. Not, you understand, in evaluating their own programming, but when they are criticizing the programming of others. And by others I mean Fox News Channel, because that is a major portion of CNN’s coverage most days.

One of the things that CNN hosts bring up often about Fox News is whether and which shows are opinion and are not, and which hosts and anchors should or should not be offering their own take. That’s actually something a lot of people talk about, to varying degrees: analysis vs. opinion vs. reporting.

There is a difference between analysis and reporting, and it that difference is conveniently forgotten when there are partisan jabs to made. In the case of CNN’s newest new hire, Kasie Hunt, the preponderance of her analysis (the context, to use a word treasured by the left) shows very clearly no bias toward the right, and so the objection that she was shilling for the right was hollow at best.

But “t-shirt meme” Harwood? The same cannot be said, which is why these pure pro-Biden pieces masquerading as analysis can so much more easily dismissed as partisan puff and prop.

for conservative white Christians who fear America’s slipping away, “it’s about not giving an inch – absolute resistance”

the fact that Cheney and Kinzinger embrace reality/tell the truth may make them outcasts within GOP caucus, but they are still Republicans

OTOH, the Democrats' top three leaders will not be lying about the results of the 2020 election https://t.co/TEEfYBpSRS

I can hear the “where’s the lie?” engines are already whirring up to speed as I type this, but among his many partisan tweets and retweets, these are the more subtle, less on the nose fare. Openly apple-polishing about how truthful Democrats are, sneering that truthfulness makes you “outcast” on the right. It’s not observation, it’s venom.

Harwood’s Twitter profile is no different from his on air personality. It is effusively pro-Democrat, virulently anti-Republican, highly opinionated, peppered with attempts at snark and snide commentary. He’s almost as reliably a shill for Democrats as CNN’s Daniel Dale. Honestly the more I think about it, he fits in rather well at his network.

I mean, look at this one:

easier to comprehend by recalling:

in Barr’s life, the share of Americans who are white Christians has fallen by half

Putin has made common cause w/white nationalist right around the world https://t.co/ZCVCMH6VYL

If that’s different from Rachel Maddow I’m not sure how.

We’ve spent four+ years now hearing about how memes and photoshops are “doctored” images (a claim defended with that same faux shock, “What are you saying that’s a REAL photo? Oh you’re not? So it IS doctored?”), but Harwood had no problem retweeting it, and patted himself on the back for how smart and clever he was to say “accurate” in order to inoculate himself.

It’s one of the oldest tricks in the bitter partisan’s guide to Twitter. Not sure they’re teaching it at Columbia, though. (Yet.)

So it was partisan sniping, in keeping with his on air commentary, that matches his writing for CNN’s website, and in tone and tenor fits perfectly with the snarky, pro-Democrat, anti-Republican, pro-Left, anti-right retweet habits, that ignores the strict delineation between news and opinion his network demands of other networks, and hypocritically shares a doctored image despite years of griping about such images from his political side of the aisle.

Any questions? Because if one of them is “what exactly is John Harwood’s role at CNN” the answer is “he’s a general purpose opinion contributor with the inexplicable title of ‘White House correspondent.'”

You’re welcome. This press conference is now over.