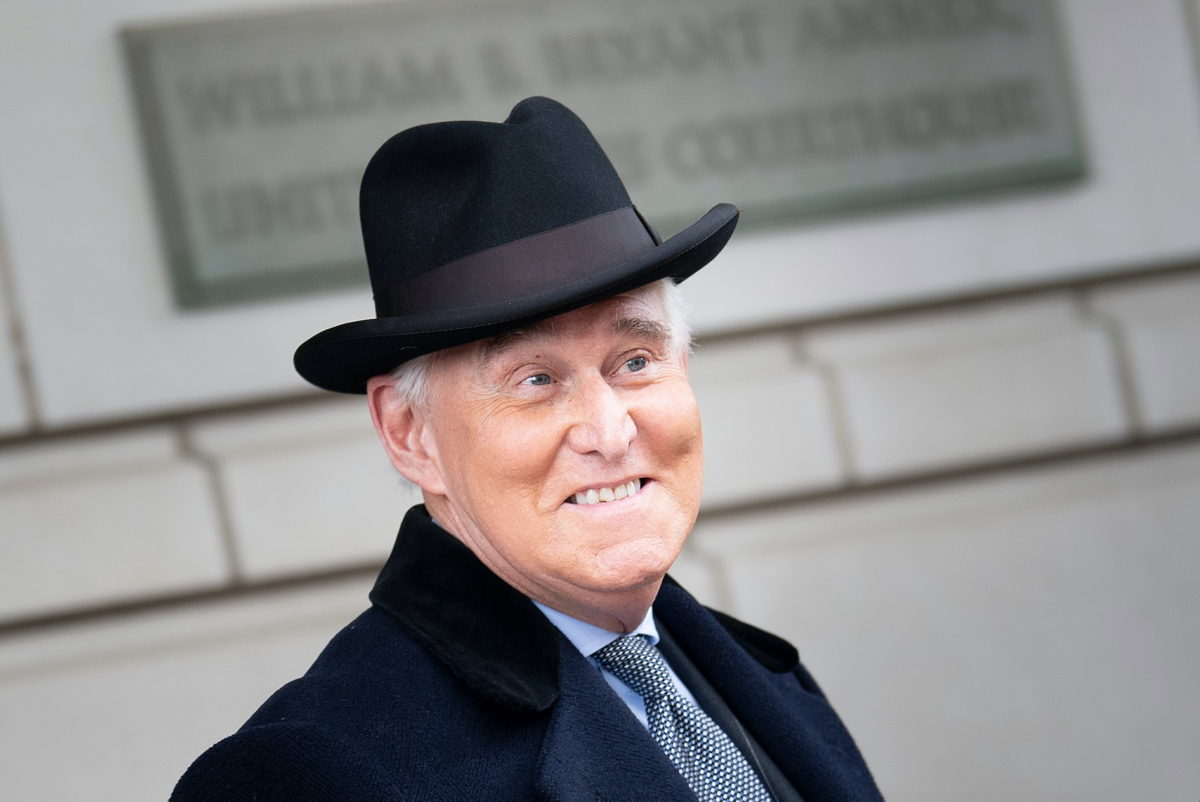 The already incredibly weird Matt Gaetz saga just got even weirder. The Florida congressman is under investigation for allegedly paying for sex with an underage girl, stemming from an absolutely bonkers set of dominoes tumbling from the allegedly corrupt acts by former Seminole County (Florida) Tax Collector — and close Gaetz pal — Joel Greenberg.

New reporting from The Daily Beast describes several drafts of a confession letter that Greenberg allegedly wrote, to give to convicted felon (and beneficiary of a pardon from former President Donald Trump) Roger Stone, so that Stone could lobby Trump for a pardon on Greenberg’s behalf.

And that confession letter reportedly contained detailed descriptions of Gaetz and Greenberg having sex with a girl who was 17 years old at the time, paying her for it, and then resuming the arrangement again after she was 18.

Oh, and there’s this: Greenberg allegedly offered to pay Stone $250,000 in Bitcoin if he helped him get a pardon.

The letter reportedly contains express admissions that Greenberg helped Gaetz make arrangements to pay women for sex, and at least one of them was underage. From the Beast:

“On more than one occasion, this individual was involved in sexual activities with several of the other girls, the congressman from Florida’s 1st Congressional District and myself,” Greenberg wrote in reference to the 17-year-old. “From time to time, gas money or gifts, rent or partial tuition payments were made to several of these girls, including the individual who was not yet 18. I did see the acts occur firsthand and Venmo transactions, Cash App or other payments were made to these girls on behalf of the Congressman.”

The Beast also obtained screenshots of private messages between Stone and Greenberg discussing the possibilities of a pardon. In those messages, both Stone and Greenberg repeatedly mention how they viewed Gaetz’s role in the alleged sex trafficking scheme as strategically helpful to secure a pardon. Their assumption was that Trump would want to help Gaetz, a staunch ally of the former president, avoid getting ensnared in the investigations himself.

They also discussed the $250,000 payment several times. “Today is the day,” Stone reportedly wrote in a Jan. 13, 2021 message. “We will know by the end of the day…I hope you are prepared to wire me $250,000 because I am feeling confident.” Greenberg reportedly replied that he would send Stone “another 50K” if he could get the pardon secured that day. It has not been confirmed if Greenberg actually sent Stone any money.

Unfortunately for Greenberg and Gaetz — and fortunately for everyone who enjoys reading Weird Florida stories — Trump declined to grant Greenberg a pardon. Three separate sources told the Beast that Greenberg’s name was indeed among those that were submitted to Trump for consideration. Several Trump administration officials confirmed that Greenberg’s name had been considered, but they were unaware of Stone’s involvement.

But wait, there’s more: according to the Beast’s reporting, Gaetz himself helped stomp out Greenberg’s hopes for a pardon. In a Jan. 30 text, Stone reportedly told Greenberg that Gaetz didn’t just refuse to help Greenberg, but also tried to discourage Stone from helping him.

Let’s review the chain of dominoes again: Greenberg allegedly attempted to smear the reputation of Brian Beute, his Republican primary opponent in the 2020 election, using falsified social media profiles and letters with false accusations that Beute had committed sexual misconduct with an underage male student. Greenberg got caught in part because his fingerprints and DNA were on the letters, the subsequent search warrants turned up more computer evidence of Greenberg’s alleged misdeeds, and when he was arrested, he was found to be in possession of multiple fake driver’s licenses (part of the duties of the county tax collectors in Florida is to issue driver’s licenses and collect the annual fees for them).

The investigation into the fake driver’s licenses allegedly implicated Gaetz, who was reportedly seen on security camera footage with Greenberg late at night in one of the tax collector’s office locations as he showed him how he was making the fake IDs. The investigations have also uncovered messages and records of Venmo payments between Greenberg, Gaetz, and some of the women allegedly involved in the sex trafficking.

In other words, Gaetz is reported to have helped hurt Greenberg’s chances of a pardon, in the very criminal investigation that has now ensnared the congressman himself.

To add a further layer of weirdness to this tale, even if Greenberg had managed to get a pardon from Trump, he and his circle might still have ended up in legal trouble.

A source with knowledge of the investigations told Mediaite that word of Greenberg’s efforts to obtain a pardon became known to Beute’s attorney, David Bear. Bear then contacted several local reporters to advise them of what was happening, and urged them to publicly call for Seminole County State Attorney Phil Archer to take on state level prosecution of Greenberg’s alleged crimes in the event he was successful in securing a federal pardon.

Mediaite reached out to Bear Thursday evening, and he confirmed that he had sent those communications as described to local media. Bear, a former prosecutor in the Orlando area, previously told the Washington Post earlier this month that he and Beute had successfully convinced the Seminole County Sheriff’s Office to investigate Greenberg’s alleged attempted defamation of Beute and issue subpoenas, and then encouraged them to bring in federal authorities to assist in the investigation when the scope of Greenberg’s alleged misdeeds grew beyond what the resources of the county sheriff could easily manage:

Bear asserted that were it not for his and Beute’s persistence in holding those accountable who made false allegations against him, the case might have gone away altogether. State authorities had known of allegations of misconduct surrounding Greenberg for years and had shown little appetite to bring a criminal case. While it is possible federal authorities would have pursued the matter eventually, given the allegations surrounding Greenberg, the crime against Beute gave them an immediate reason to arrest the tax collector and eventually open the investigation into Gaetz.

Stone has denied any involvement in seeking a pardon for Greenberg, telling the Beast that he “made no formal or informal effort in regard to a pardon for Mr. Greenberg” and “never requested or received a penny from Mr. Greenberg.”

So far, Gaetz has not been charged with any crimes and has vociferously denied any wrongdoing, as Logan Circle Group, the outside PR firm representing Gaetz, said in this statement in response to the latest reporting:

“Congressman Gaetz has never paid for sex nor has he had sex with a 17 year old as an adult. We are now one month after your outlet and others first reported such lies, and no one has gone on record to directly accuse him of either. Politico, however, has reported Mr. Greenberg threatening to make false accusations against others, which seems noteworthy for your story and in fact sounds like the entirety of your story. Congressman Gaetz has had no role in advocating for or against a pardon for Greenberg and doubts such a pardon was ever even considered.”

Greenberg remains incarcerated in Central Florida in a federal facility. The next relevant date in his case comes up soon on May 15, and his defense attorney has made public comments indicating he believes Greenberg will be able to secure a plea bargain by that date.

There is some curious language in the Beast article, noting that Greenberg’s messages with Stone were sent over the encrypted messaging app Signal, and utilized the option to make the messages self-delete after a set period of time, but “Greenberg appears to have taken screenshots of a number of their conversations.”

Considering that Signal messages are only viewable by the sender and recipient, is it more likely that someone hacked Greenberg’s phone, that the federal investigators who have so far refused to comment on the ongoing investigations would leak such vital evidence, or, perhaps, just maybe, that Greenberg (either directly or through an ally) is the source for the Beast story? The strategy, presumably, would be to nudge the feds along in agreeing to a plea bargain by circulating some of the evidence that Greenberg allegedly has against Gaetz — the friend he is accused of helping pay women for sex but then left to rot in jail when Trump could have granted him a pardon.

Stock up now on your favorite flavor of popcorn for May 15.