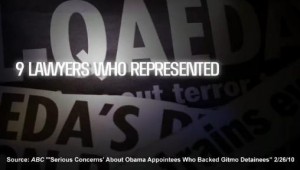 Despite the absurdity of the Liz Cheney/Keep America Safe “Al Qaeda 7” ad, and the fact that Cheney’s group sounds like its mascot ought to be a pee-pants version of Woodsy Owl, the spot has been generating a lot of heat. Pulitzer Prize-winning columnist and frequent Countdown contributor Eugene Robinson wrote a scathing op-ed yesterday attacking the fallacy behind the ad, but it could have easily been directed at his friend and colleague, Keith Olbermann.

Here’s the ad that everyone’s so worked up about:

Before I get to Robinson’s piece, I’d like to point out a few things about the ad. First of all, I maintain that this is comically absurd, the kind of logic that can be defeated by a 3rd grader who’s seen even a few episodes of “Schoolhouse Rock,” but what’s not funny at all is the reckless threat of violence embedded in the ad. What is a safety-minded patriot supposed to do once the shadowy figures, in league with the terrorists, are revealed? Set up a perimeter?

The ad also contains a subtle smear of ABC News. In the screenshot above, the ad lists the news source for the ad as “ABC ‘Serious Concerns’ About Obama Appointees Who Backed Gitmo Detainees.” This gives the smear the patina of legitimacy.

In reality, the article to which they are referring is “Republicans Slam Attorney General Eric Holder Over Terrorist Defense Lawyers at Justice Department,” with the subtitle “‘Serious Concerns’ About Obama Appointees Who Backed Gitmo Detainees.”

It’s a deliberate attempt to mislead the viewer, and ABC News shouldn’t stand for it.

The crux of Eugene Robinson’s argument is simple, and is aided by now-hot founding father John Adams, whose defense of British soldiers from the Boston Massacre is being whipped out these days like it’s showtime at the Congressional shower:

In other words, they did what lawyers are supposed to do in this country: ensure that even the most unpopular defendants have adequate legal representation and that the government obeys the law.

Liz Cheney is not ignorant, and neither are the other co-chairs of her group, advocate Debra Burlingame and pundit William Kristol, who writes a monthly column for The Post. Presumably they know that “the American tradition of zealous representation of unpopular clients is at least as old as John Adams’ representation of the British soldiers charged in the Boston Massacre” — in other words, older than the nation itself.

Obviously, I couldn’t agree more, and I look forward to Eugene’s next appearance with Keith Olbermann, where he will hopefully remind Keith that “zealous representation of unpopular clients” (like Citizens United) is a patriotic imperative, not justification for being compared to a Nazi:

Olbermann (mildly) apologized for his general over-the-top-ness the following night after being embarrassed into it by Jon Stewart, but not for the Floyd Abrams Nazi comparison. When Keith does return to his Countdown anchor seat, perhaps he will remedy this, with Robinson’s help. Absent this, he will remain aligned with Liz Cheney, and unable to grasp, as Robinson writes, “the concept of shame.”