‘I Don’t Think It’s A Sin’: Trump Had an Interesting Take On Adultery In 1990

‘I Don’t Think It’s A Sin’: Trump Had an Interesting Take On Adultery In 1990 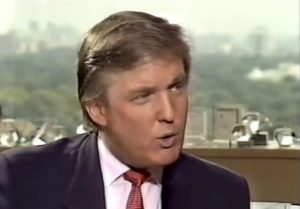 Digging through the archives of the New York Post, The Daily Beast uncovered an interview with current Republican presidential nominee Donald Trump where he detailed his belief that adultery is not a sin.

Since the Post doesn’t have any of its archives prior to 1998 available to the public, the Beast had to obtain actual paper copies of older issues. In a February 23rd, 1990 interview, the real estate mogul discussed his views on marriage while also indicating that he was having an affair with Marla Maples at the time.

“Do you think adultery is a sin?” Trump was asked in the February issue.

“Very good question,” he responded. According to the report at the time, Trump paused and then said:

The reporters pressed: “Would you do it?” After which, Trump coyly responded “I’ll let you guess.”

He had told reporters a few days prior that he had never cheated on his wife but admitted that he had hid Maples in the Hamptons in order to keep the media from prying into her life. The two met, in fact, in the Marble Collegiate Church, where Donald and Ivana married 13 years prior.

It was in that year that Marla Maples and Ivana Trump got into a public fight at an Aspen ski resort. Donald and Ivana would get divorced that year and Trump would later go on to marry Maples. That marriage would eventually end in divorce as well.

Trump has tried to attack Hillary and Bill Clinton over their marriage, Bill’s infidelities and Hillary’s role as an “enabler” to Bill’s sexual misconduct.