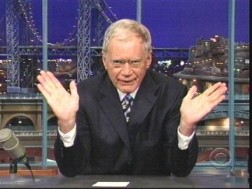 Is the journalism industry so down-at-the-mouth these days that David Letterman is the only thing standing between it an utter irrelevance? Probably not, but you’d be forgiven for drawing that conclusion based on how much ink the Late Show host’s love life continues to generate. Two of the country’s top media columnists devoted inches to Dave and his (apparently) consensual, unmarried, behind-closed-doors activities.

New York Times’ David Carr acknowledges that thus far Letterman has appeared to escape the worst repercussions of a sex scandal; namely loss of advertisers and viewers, but warns tougher days could be ahead:

There are two issues, the first having to do with media dynamics: will the drip, drip, drip of coverage of the legal case eventually erode his standing as someone suitable to tuck us in every night? And second, could his pratfall hurt his comedy?

Mr. Letterman’s hero Johnny Carson thrived in people’s living rooms at the same time that he worked his way through three divorces; his lack of skill in marital matters never seemed to diminish his appeal. But Mr. Carson lived in a very different media epoch, when there was no Gawker, the tabloids were far tamer and TMZ were just three letters of the alphabet.

Carr goes on to note that Gerald Shargel, the lawyer for Robert Halderman, is a pitbull who will stop at nothing to produce dirt on Dave. So far of course it seems like the excess in coverage, especially coming after Roman Polanski’s arrest and numerous political sex ‘scandals’, has only succeeded in highlighting the absurdity of the coverage Letterman has received. An irony that the Washington Post‘s Howie Kurtz touches on, and appears to sort of defend.

But what made Letterman think he could offer an open-ended admission about sleeping with subordinates without sending the media into a frenzy? [What indeed!] Perhaps he sees himself as occupying a different realm — an entertainer who pokes fun at politicians for sexual shenanigans, not a public figure whose own dalliances are deserving of such scrutiny.

The Ensign story is complicated and not very visual. Letterman is far more famous. So the comic is turned into media fodder and the officeholder largely stays under the radar…But Letterman left too many blanks in the picture — how many women, over what period of time? — and reporters rushed to fill them in.

One might argue reporters would have rushed to fill even minor fractures in Letterman’s story regardless of what Letterman had said. Also? At least the “realm” Letterman is occupying is not of the high horse variety, the same of which cannot be said of, for example, Howie Kurtz.