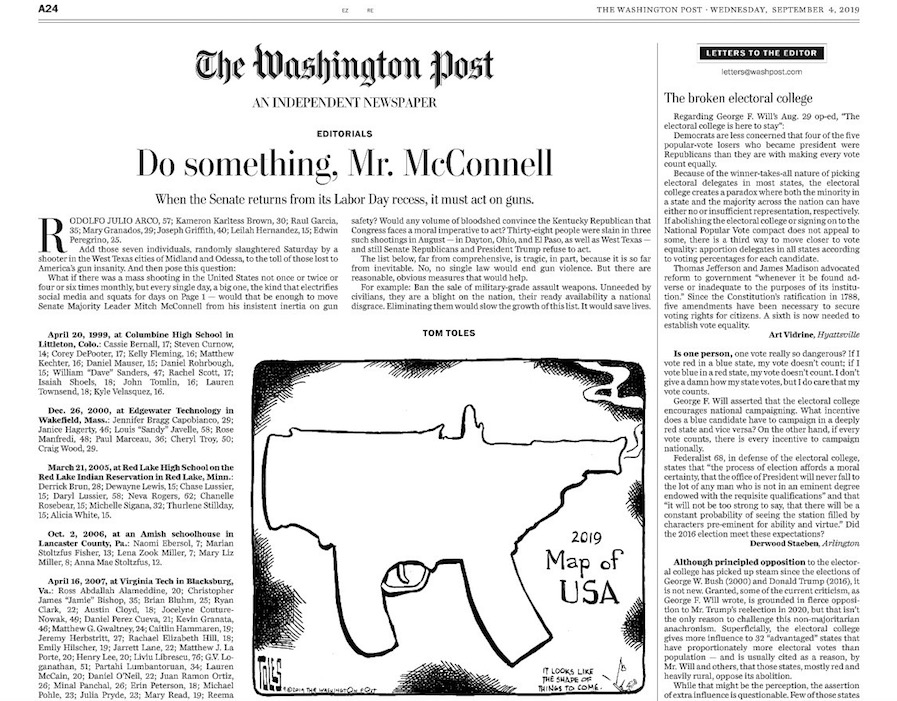 “Do something, Mr. McConnell,” implores the headline of the editorial, addressed to the Senate Majority Leader.

The piece opens by listing the name and age of each of the seven victims of the Odessa, Texas shooting that also left at least 25 wounded on Saturday.

“What if there was a mass shooting in the United States not once or twice or four or six times monthly, but every single day, a big one, the kind that electrifies social media and squats for days on Page 1 — would that be enough to move Senate Majority Leader Mitch McConnell from his insistent inertia on gun safety?” the Post Editorial Board asks. “Would any volume of bloodshed convince the Kentucky Republican that Congress faces a moral imperative to act? Thirty-eight people were slain in three such shootings in August — in Dayton, Ohio, and El Paso, as well as West Texas — and still Senate Republicans and President Trump refuse to act.”

The Board goes on to propose “reasonable, obvious measures” that could help bring down gun violence, including banning the “sale of military-grade assault weapons.”

The piece — accompanied by a cartoon by Tom Toles, showing the United States in the shape of a rifle — then lists the names and ages of victims of mass shootings in the United States, from Columbine in 1999 to the Dayton, Ohio shooting in August.