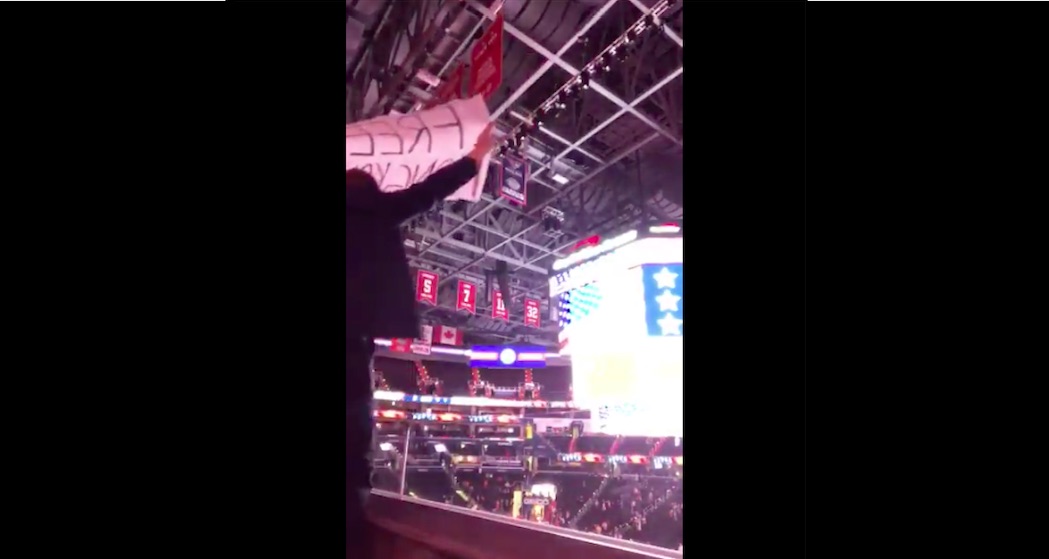 A sign-carrying protestor was removed from a game between the Washington Wizards and a Chinese pro team — the Guangzhou Loong Lions — after shouting out “Free Hong Kong” in the moment between the playing of the Chinese and U.S. national anthems.

As first recorded on video by Washington Post sports reporter, Candace Buckner, the protestor was standing in an empty upper deck section when he unfurled his sign and loudly screamed out his support for the pro-democracy protests in Hong Kong. NBA league policy allows fans to bring signs into games as long as they do not contain “obscene or indecent messages.”

At the end of the Chinese national anthem and during the silence before the singing of the Star Spangled Banner, a protestor screams “Free Hong Kong!” while holding a sign. He walks out of the arena peacefully, followed by an usher. pic.twitter.com/H9JrZHb9FO

The protestor, who later identified himself on Twitter as Patrick Hedger, a research fellow at the libertarian Competitive Enterprise Institute, posted his own video of the moment. In it, Hedger is seen yelling out “Free Hong Kong!” multiple times and then adding: “We will not bow to Communist Chinese oppression! Freedom of Speech!” He quickly folded up his sign when approached by security, who can be heard confiscating his sign.

This marks the second such protest of late, after a husband and wife were escorted out of a Philadelphia 76ers preseason game for peacefully holding up signs with the same “Free Hong Kong” message. The NBA was sharply criticized after it released a public statement in English and Chinese apologizing for a Houston Rockets executive who spoke out — and then publicly recanted — in support of pro-democracy protestors in Hong Kong. After the backlash, however, NBA President Adam Silver seemingly flip-flopped and came out in favor of free speech in Hong Kong, which prompted a stinging rebuke from Chinese state media.

China has a huge fan base for basketball, and the league has a $4 billion business deal to access that market.