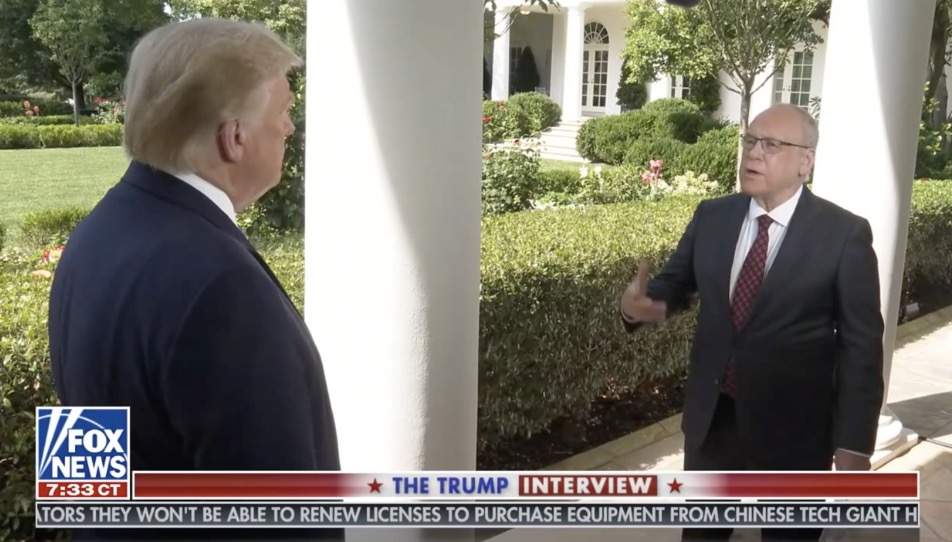 Fox News has announced that President Donald Trump will do his first on-air interview since being diagnosed with Covid-19 Friday night.

The interview will air at 8 PM on Tucker Carlson Tonight and will be conducted by Dr. Marc Siegel, who “will conduct a medical evaluation and interview during the program,” according to Fox News. It is not clear from the Fox News report if this interview will occur live on-air, but it will almost certainly be pre-taped earlier in the day.

Coughing or clearing one’s throat is not uncommon for anyone, but there is very little public information about President Trump’s health. When pressed repeatedly by Hannity on when he was last tested for the coronavirus, the commander in chief obfuscated and only said that he would probably undergo a test “tomorrow.”

President Trump’s physician Sean Conley released a letter on Thursday that stated that the president would be able to return to public engagements this weekend and had completed his course of therapy for the disease. “Saturday will be day 10 since Thursday’s diagnosis, and based on the trajectory of advanced diagnostics the team has been conducting, I fully anticipate the President’s safe return to public engagements at that time,” Conley said in his letter.

There is a legitimate concern that President Trump is still recovering from the ill-effects of the potentially deadly Covid-19 contagion, with many medical professionals averring that he still shows the symptoms of someone with pneumonia.