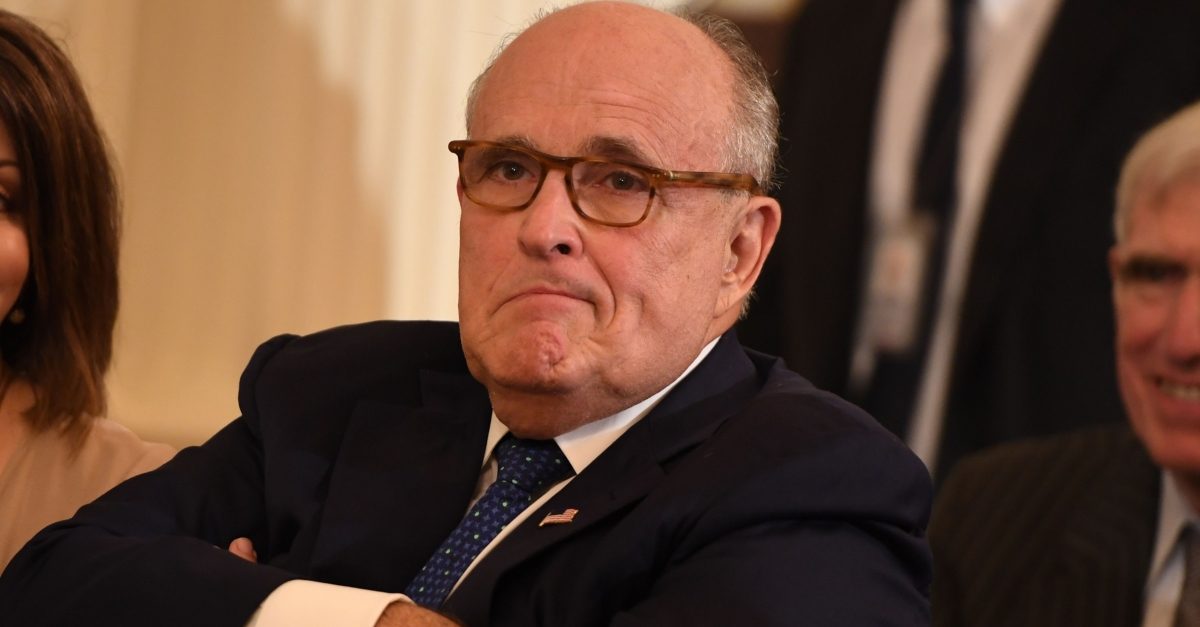 Rudy Giuliani accidentally butt-dialed and left voicemails trashing Joe Biden and talking about needing cash, according to the NBC News reporter he butt-dialed.

NBC’s Rich Schapiro reported he received a late-night call from President Donald Trump’s lawyer on Oct. 16 while he was asleep.

When he woke up “a message exactly three minutes long was sitting in his voicemail. In the recording, the words tumbling out of Giuliani’s mouth were not directed at the reporter. He was speaking to someone else, someone in the same room,” Schapiro wrote, referencing himself in the third person.

“Giuliani can be heard discussing overseas dealings and lamenting the need for cash, though it’s difficult to discern the full context of the conversation,” the article continues.

The article goes on to detail audible excerpts of Giuliani’s conversations with associates.

“Is Robert around?” Giuliani asks.

“He’s in Turkey,” the man responds.

Giuliani replies instantly. “The problem is we need some money.”

The two men then go silent. Nine seconds pass. No word is spoken. Then Giuliani chimes in again.

“We need a few hundred thousand,” he says.

It’s unclear what the two men were talking about. But Giuliani is known to have worked closely with a Robert who has ties to Turkey.

His name is Robert Mangas, and he’s a lawyer at the firm Greenberg Traurig LLP, as well as a registered agent of the Turkish government.

Giuliani himself was employed by Greenberg Traurig until about May 2018.

Mangas’s name appears in court documents related to the case of Reza Zarrab, a Turkish gold trader charged in the U.S. with laundering Iranian money in a scheme to evade American sanctions.

UPDATE: In a statement, a spokesperson for the firm Greenberg Traurig denied that Mangas ever spoke with Giuliani on matters concerning Turkey during their time at the firm and Mangas has not spoken with Giuliani since the former mayor left the firm in 2018.

In another butt-dialed voicemail from Sept. 28, Giuliani reportedly talks at length about Joe Biden and his efforts to investigate Biden’s family.

“In the message, Giuliani is heard talking to at least one other person. The conversation appears to pick up almost exactly where Giuliani’s phone call with the reporter left off the day before, with Giuliani insisting he was the target of attacks because he was making public accusations about a powerful Democratic politician.

“I expected it would happen,” Giuliani says at the start of the recording. “The minute you touch on one of the protected people, they go crazy. They come after you.”

“You got the truth on your side,” an unidentified man says.

Giuliani spends the entire three minutes railing against the Bidens. He can be heard recycling many of the unfounded allegations he has been making on cable news and in interviews with print reporters.

Among the claims: that then-Vice President Biden intervened to stop an investigation of a Ukrainian gas company because Hunter sat on the board, and that Hunter traded on his father’s position as vice president to earn $1.5 billion from Chinese investors.

“There’s plenty more to come out,” Giuliani says. “He did the same thing in China. And he tried to do it in Kazakhstan and in Russia.””

Schapiro reported that a call to Giuliani’s phone “led to a recorded message saying his mailbox was full.”