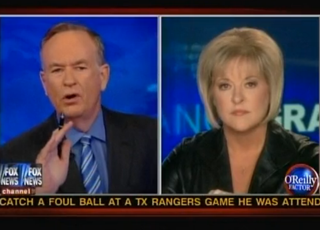 As much as it has done to elevate her national profile, the Casey Anthony trial has made a one-dimensional villain of Nancy Grace to many in the media, and while she has kept relatively quiet through the relentless scorn, Grace visited Bill O’Reilly tonight to respond to much of the criticism. Extremely defensive and borderline rude to a relatively sympathetic host, Grace explained (with dramatic scare quotes) whether she went “overboard,” how she came up with “tot mom,” and why she thinks people attack her so much.

While O’Reilly opened up with an apparent softball– “do you think you went overboard at all?”– Grace came out swinging, calling the term “overboard” “trite” given the “miscarriage of justice” the trial represented. O’Reilly highlighted her “flamboyant” presentation in response, noting that many people, including him, believed Anthony was guilty, too, but didn’t bother to make up names like “tot mom” or be so “certain” in their coverage. Speaking of tot mom, “What does Tot Mom mean, anyway?”

“It was easier for me to remember the name by the content of the case rather than the name,” Grace explained, taking offense to O’Reilly calling the nickname “denigrating,” but O’Reilly led her away from that particular batch of outrage fodder. Instead, O’Reilly led her to insults from others in the legal field, particularly the head of Court TV calling her a “monster.” “They all seem to object to your tone of certainty, and I can identify with that because I do the exact same thing that you did,” O’Reilly told her, apparently trying to keep her eye on the ball rather than taking swipes at him. It worked– she replied that “I don’t really see a need to sugarcoat the truth” and that “the whole defense theory is nonsensical.” She then went on to accuse “some of these pundits” of “wanting Tot Mom’s interview, they want the big ‘get'” and are trying to ingratiate themselves by attacking Grace. She did concede that, if she cared, the attacks would be “hurtful, but the reality is it doesn’t change the truth.” She then went on to list some people whose opinion she didn’t care about– “some newspaper writer in Peoria… some Park Avenue lawyer on national TV” (hmm, who could that be?)– though, of course, by giving shout-outs, she exposes a chink in her armor.

It was clear from the get-go that Grace went into the interview expecting to burn a bridge, which may be exactly why she has collected such a veritable number of detractors. O’Reilly was clearly not out to get her, but rather to analyze her and why she had become such a lightning rod. This at times seemed to throw her off and revealed a certain vulnerability, a self-imposed faith in being above reproach covered in the desperate aroma of needing a vacation, that may finally explain, ironically, how she has also collected so many fans.