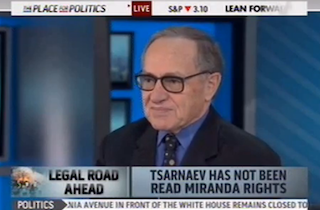 Civil rights lawyer Alan Dershowitz joined Thomas Roberts on MSNBC this morning to discuss the debate surrounding Boston bombing suspect Dzhokhar Tsarnaev and Miranda rights. Criticizing the use of the publi safety exception to delay reading him Miranda warnings, Dershowitz warned that, in the end, the decision may backfire.

Dershowitz insisted that authorities would come to “regret” not reading Tsarnaev his Miranda rights, partly because there was never any basis for the public safety exception, but, more significantly, because they may have “blown” their chances of getting a death penalty conviction. Why? Because they’ll need to be terrorist intentions, but the information they get may not be admissible in court.

“They are using the public safety exception as an excuse, and they are using it because they don’t think it will hurt them because they can establish the crime,” Dershowitz asserted. “How will they find out what was in the mind of the defendant? By asking him questions. If those answers are excluded, they will come to regret not having given him his Miranda warnings.”

Tsarnaev does have the right to remain silent, but he’s unaware of it, he later added. “We’re trying to trick him into disclosing information, and that was precisely what Miranda was designed to prevent. If it’s allowed today with him, an American citizen, where will it stop?”

Throughout the segment, as Roberts pointed to various arguments (such as, “the homeland is the battlefield”), Dershowitz stressed the need to be able to decipher Tsarnaev’s motives and intentions and being able to present that information in court.

“There will be a price to be paid for it,” he warned.