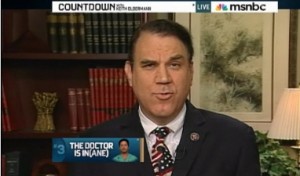 Rep. Alan Grayson (D-FL), who first made waves with his bid to become the go-to Democratic rabble-rouser during last summer’s pitched health care battle, appeared on Countdown last night to give anti-reform Florida urologist Jack Cassell what for. While I don’t doubt that Grayson would much rather see Cassell make his way through the penal system, rather than the penile system, his low-energy delivery produced a somewhat weak stream of invective.

Even host Keith Olbermann couldn’t get a rise out of him with a joke about right-wing garbage collectors. Somebody get Grayson a nap and some Red Bull.


As Jon Stewart pointed out, there’s a vas deferens between what Cassell is doing and Jim Crow, so Grayson wisely abandons that confusing allegory, instead pointing out the inexcusable violation of trust that Cassell’s actions represent. Still, he misses a more realistic nightmare scenario: What if someone like Cassell is your surgeon, and you forgot to change out of your “Yes, We Can” tee-shirt? Do you want this guy’s knife anywhere near your “boys?”

While Cassell is an easy target here, I also think Olbermann and Grayson miss an opportunity here to focus on Fox News for letting the guy spew a bunch of nonsense about the health care reform bill. Fox News would like you all to believe that their point of view is confined to their “opinions.”

As for Grayson, he’s filling a role that is sorely needed for the Democrats, but he needs to put the “lightning” back in “lightning rod.”