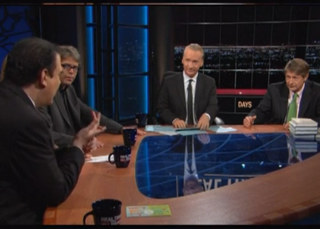 One would think that the anti-corporatist ideals of the Occupy Wall Street movement would receive some safe harbor on Real Time with Bill Maher, and one would be correct that their ideology gelled entirely with the audience. But before Alan Grayson passionately stood up as a spokesman for their cause, the panel spent a fair amount of time mocking the group ruthlessly, for their “bongo drums,” disorganization, and incoherence.

“The don’t really have a coherent message,” Maher noted, with P.J. O’Rourke laughing beside him through an Occupy Wall Street bashing session about how useless their bongo drums are and how they don’t have bathrooms (that latter complaint from panelist Nicolle Wallace, who noted that it was “the logistics of the protest that bother me”). Maher, on his end, was just dismayed at the lack of marketing ability– “the Teabaggers named themselves after a gay sex act,” he joked, “but at least that was catchy.”

Grayson, on his end, found the complaints of the protesters compelling (incidentally, Grayson is planning a comeback to Congress once the Republican who replaced him is up for reelection). “Wall Street has iron control over the economic policies of this party,” he began, interrupted in his rant only by O’Rourke, who shouted “get the man a bongo drum!” Grayson then gave a bit of a monologue on the evils of corporatism and the Federal Reserve, and how the money in politics needed to be separated from the actual governing, and by the time he was done, the crowd was on their feet. O’Rourke, on his end, completely overlooked the potential for a Congressional run: “there may be room [for you] on the Democratic side of the Presidential election.”