Ann Coulter Explains Bleeped Insult To Joy Behar: ‘I Said ‘D*ckweed,’ I Thought You Could Say That!’ 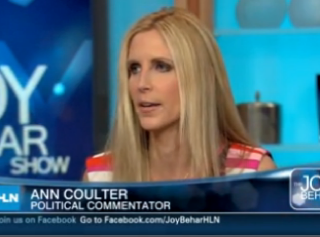 Ann Coulter made a rare appearance on MSNBC today, and, well, the insults were rolling fast and loose, and not escaping the censors. Coulter visited Joy Behar tonight to review her experience there and clarify what exactly she called Sen. John McCain that merited bleeping: “I said ‘dickweed,’ I thought you could say that!”

RELATED: Ann Coulter Gets Bleeped Out By MSNBC Censors On Morning Joe

The Headline News censors were merciful this time to Coulter, so we now know for sure what she said to McCain (she had also tweeted her statement earlier to clarify). She told Behar tonight that it was not meant to be frivolous, either: “I was making a very important point, I might add.” Noting that the discussion was centering around a lack of consistency in the records of Republican candidates, “I was just making the point that I don’t think consistency is the most important value,” she explained. “Look at John McCain, he was consistently a dickweed.”

Behar laughed and noted that Coulter was not the first person to be profane on Morning Joe— Mark Halperin had gotten in trouble for calling the President a “dick” on the network, too. “If they have to bleep that,” Coulter joked, “they won’t be able to use the 2012 campaign slogan ‘Obama: He’s Kind of a Dick.'”

As Coulter had been a frequent guest on Behar’s program, now winding down, Coulter noted how sad she was to see the show go, as it was her sanctuary from the Casey Anthony trial on the network. “For eight months your show was the only one I could watch and avoid hearing anything about that white trash bimbo who apparently… was acquitted of killing her child” (Coulter later clarified that she was not universally disparaging poor people– “there are many lovely people who are white, black, Latino, who are poor”).

The full interview airs tonight on HLN at 10PM– the excerpts on Anthony and Morning Joe below: