Coulter: ‘With Newt Gingrich You Throw Out The Baby And Keep The Bath Water’
video

Coulter: ‘With Newt Gingrich You Throw Out The Baby And Keep The Bath Water’ 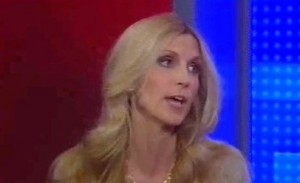 Conservative pundit Ann Coulter stopped by Fox and Friends Sunday morning and gave a spirited analysis of Newt Gingrich‘s decisive victory over Mitt Romney in the South Carolina primary. “Apparently, South Carolinians would rather have the emotional satisfaction of a snotty remark toward the president than to beat Obama in the fall,” Coulter zinged.

Co-host Dave Briggs asked Coulter if Romney –her candidate of choice– needed to “show more fire in the belly than we have seen?”

“No, he’s doing fine,” Coulter responded. “This is not going to be the electorate in the fall. I am pretty sure we’ll get everyone who voted for John McCain, since no one voted for John McCain, because we liked McCain, it was to stop Obama. We have those voters and now you have to get people who voted for Obama and having a candidate who calls Obama a Kenyan colonialist or socialist, that is not what you need, and at the same time, with Newt Gingrich you get the name calling for the president, very popular with the tea party crowd, not so popular with independents, and, he won’t put a fence on the border but wants amnesty for illegals and took 1.6 million from Freddie Mac and he attacked Paul Ryan’s plan on Social Security and with Newt Gingrich you throw out the baby and keep the bath water!”

Clayton Morris noted that what Gingrich was doing was out of Michele Bachmann’s playbook.

“She was conservative — Newt Gingrich is the least conservative of these candidates and the least electable!” Coulter exclaimed. “Fantastic but the South Carolina audience loves when he yells at John King for making a perfectly legitimate opening question.”