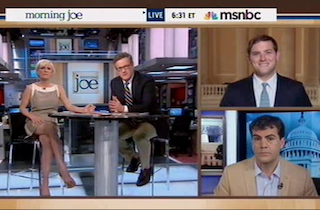 Come across any random story about former New York congressman Anthony Weiner, and there’s a good chance it mentions his sexting scandal. Indeed, Google his name and the Wikipedia page for “Anthony Weiner sexting scandal” is one of the top results. With rumors swirling about his mayoral aspirations, Morning Joe, too, had a story about him on Friday. But the potential problem they discussed had nothing to do with his risqué photos.

Pegged off a POLITICO story, Joe Scarborough and a handful of guests spoke about Weiner’s wife, Huma Abedin. The report pointed out that “Abedin — Hillary Clinton’s longtime aide and the wife of all-but-declared New York mayoral candidate Anthony Weiner — spent her final months at the State Department working as a part-time consultant with the agency who at the same time was allowed to represent outside clients.”

“The most interesting thing for people on the Hill with Anthony Weiner is his connection to the Clintons and possibility of when she runs in 2016,” Luke Russert remarked at one point. “Is this a good thing for him to be out front-and-center, especially with Huma at his side? Obviously she stood by him.”

Weiner would be glad to see that that comment was about as close as they got to mentioning the scandal — with the exception of a reference to fellow disgraced politician (and Scarborough favorite) Mark Sanford. (But hey, Sanford just sealed his comeback with a House seat.)