Are Conservatives Really Going After Michelle Obama for Promoting Water? 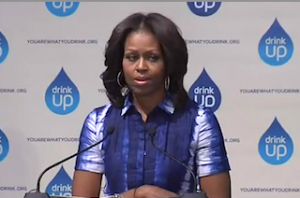 Last night, Bill Maher made a joke that may have just become reality. During a discussion about the GOP’s tendency to “blacktrack” (Maher’s term) on long-held positions just because President Obama happens to agree with them, the host suggested that the White House may be testing Republicans with First Lady Michelle Obama’s new public health campaign.

“I saw in the news that Michelle Obama has a new program,” Maher said. “You know she tried to get kids to eat better and Republicans were against that. And now she wants people to hydrate more, I’m not kidding, she says ‘Drink more water.’ I think this is a test to see if the Republicans will come out against water. That’s not water, that’s socialism juice!”

Watch the Real Time clip below, via HBO:

The riff got a huge laugh for Maher’s liberal audience, and also from his one conservative guest, former RNC chairman Michael Steele. The idea that anyone could criticize Michelle Obama for promoting hydration is preposterous, right? Well…

The first lady promoted her new “Drink Up” campaign earlier this week at the aptly-named Watertown High School in Wisconsin, and ever since it has been drawing far more criticism than she or anyone else in the Obama Administration could have predicted. She told students, “Drink just one more glass of water a day, and you can make a real difference in your health, for your energy and the way that you feel.” She cited “scientific evidence” that says our bodies perform better when they are “hydrated” than when they are even “just a little bit dehydrated.” And perhaps most importantly, Obama said, “The truth is, we all have a choice about what we drink and when we choose water, we’re choosing to be at our very best.”

Some conservatives have been quick to jump on Michelle Obama for her “scientific” claims, pointing to a POLITICO story that quotes experts who claim there are discernible benefits from drinking one extra glass of water a day. Rush Limbaugh called it “just more command-and-control” from the Obama White House. The Washington Times went after the “the nation’s most prominent anti-obesity crusader” for misleading the public. And the Washington Free Beacon blasted the headline, “Michelle Obama’s Drink More Water Campaign Based on Faulty Science.”

And who’s the expert that most of these sites point to? That would be Dr. Stanley Goldfarb of the University of Pennsylvania, who said, “There really isn’t data to support this. I think, unfortunately, frankly, they’re not basing this on really hard science. It’s not a very scientific approach they’ve taken. … To make it a major public health effort, I think I would say it’s bizarre.”

Dr. Goldfarb, it just so happens, has spent a good amount of time arguing against Obamacare as a contributor to conservative publications like David Frum’s FrumForum and The Weekly Standard. That doesn’t mean that he’s being disingenuous about his opposition to the “Drink Up” program, or lying about the medical facts, but it does call into question his motives for speaking out so loudly against it.

Of course, what the first lady most notably did not say to those Wisconsin high school students is this: “Do not drink soda.” There could be several reasons for this. One is that the White House saw the beating Mayor Michael Bloomberg took for his proposed soda ban in New York City and wanted to avoid, as much as possible, subjecting Michelle Obama to those “nanny state” accusations. But additionally, the first lady has decided to actually team up with the country’s biggest soda distributors to promote her campaign.

POLITICO reported that American Beverage Association lobbyist Susan Neely visited the White House several times, possibly to discuss the campaign and that some of the biggest names in bottled water, including Aquafina, Dasani, Evian, Poland Spring and more will help promote it. PepsiCo bottles Aquafina, while Coca-Cola bottles Dasani.

Those companies would probably not look fondly on the first lady openly speaking out against sugary soda drinks, but if she can help push some bottled water sales, they’re happy to help. While the right would like the first lady to stop telling people what to do altogether, there are many on the left who wish she could just come out and say, “Stop drinking sugary soda.”

Unfortunately, that stance has been deemed politically untenable for the first lady right now, so her team obviously decided the best they could do is “nudge” Americans in the direction of drinking more water. It feels very much in line with the work of the White House’s “Behavioral Insights Team,”, which aims to “encourage behavior subtly rather than outright require it,” and was first introduced in former Obama Administration Regulatory Affairs head Cass Sunstein’s book, Nudge: Improving Decisions About Health, Wealth, and Happiness

When Michelle Obama tells Americans that “we all have a choice about what we drink and when we choose water, we’re choosing to be at our very best,” she is doing her best to “nudge” people away from drinking soda and towards the healthiest beverage of all: water. She and her team know that if she just came out and told Americans to stop drinking soda, they would tune her out, or worse, attack her publicly. What she never could have counted on is the ridiculous criticism she has received just for saying, “Drink Up.”