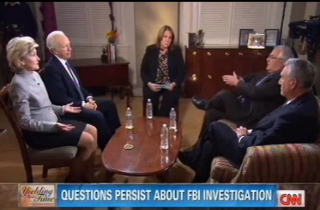 While appearing together on CNN’s State of the Union this morning, Rep. Barney Frank (D-MA) and Sen. Kay Bailey Hutchison sparred over her implication that the FBI intentionally sat on the revelations about Gen. David Petraeus‘ extramarital affair until after the election, with Frank accusing the senator of using a “weasel word” to make her point.

“I’m very worried,” Hutchison told host Candy Crowley. “I want to know a whole lot more about what these first emails really were and did it really trigger an FBI investigation of the CIA director and a low level and it wasn’t raised to a higher level? If anybody is investigating the director of the CIA, the President of the United States should know immediately, and I feel like, a, we don’t know enough, and, b, I have great concerns about a lot of this.”

Frank then shot back: “Are you suggesting there was some cover-up, that the FBI are playing games? I think we ought to be explicit about this. I’m troubled by the implication of your statement and are you suggesting that something wasn’t legitimate here? Because that would trouble me.”

A little later on, the exchange got a bit tense:

HUTCHISON: I’m suggesting that I have great concerns about the legitimacy of —

FRANK: Excuse me, “great concerns” is kind of a weasel word —

FRANK: It seems to me frankly you’re kind of hinting at something bad, and I don’t see what that could be.

HUTCHISON: I’m hinting at something out of control and not with the proper authority.

FRANK: Do you distrust the FBI? Is [FBI Director Robert] Mueller lying? Who are you accusing of not having done the right thing?