Part 1 – Before She Was The Rachel Maddow: The Best Of The Maddow-Tucker Carlson Debates
video

Part 1 – Before She Was The Rachel Maddow: The Best Of The Maddow-Tucker Carlson Debates 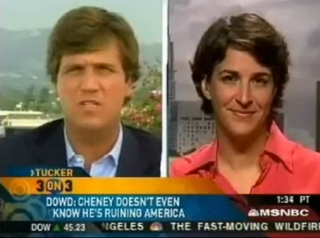 In this installment from 2006, a survey asking children whether they haven’t had same-sex experiences leads the discussion, a survey Carlson finds problematic because it imposes beliefs on the young people taking the survey. He calls it “the definition of propaganda,” something Maddow scoffs at. “You’re smarter than what you’re saying right now,” she jokes, explaining it as a “walk a mile in your shoes” exercise. The debate is good-natured and Carlson notes that he isn’t against promoting gay rights, but that “kids” shouldn’t have beliefs imposed on them. “Kids? They’re in high school!” Maddow retorted, explaining that she gets questions like this in real life and in questionnaires all the time.