Bill Maher: ‘I’m on the Same Page as Sarah Palin’ 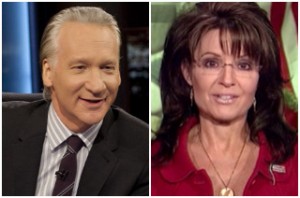 Bill Maher has a long history of what can be politely called disagreement with former Alaska Governor Sarah Palin. But on at least one issue, they appear to agree. In a new interview with The Desert Sun, Maher said he’s “on the same page” as Palin when it comes to U.S. military involvement in Syria.

“The weird thing about Syria is it has created so many strange bedfellows. I’m on the same page as Sarah Palin on this issue. That’s a very strange feeling. But I feel like I’m consistent about how I’ve always felt about how we should handle this part of the world. I think it would be a good thing if America put the world on notice that if you use these sort of weapons that are allowed, yes, we will (expletive) you up. But it is outweighed, in my opinion, by a greater need, which is the need to tamp down the inflammatory atmosphere in that part of the world.”

Of course, Palin summed up her opposition to intervention slightly more succinctly in a Facebook post notable for this memorable phrase: “Let Allah sort it out.” 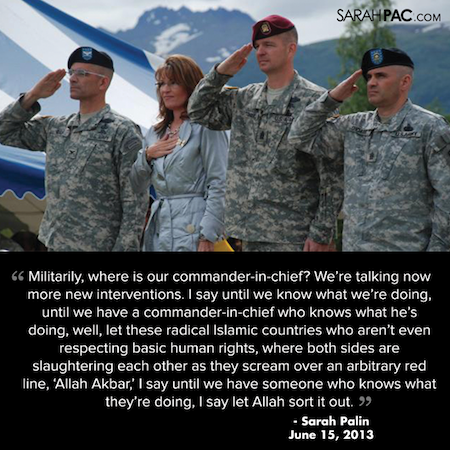 Later in the interview, Maher weighed on the national broadcast media, which he said is “in the government’s pocket.” He said he still has respect war correspondents, but asked, “Do I have a lot of respect for supposedly 24-hour news organizations that pretty much punt on the important issues of the day and throw up stories that they know are just going to get people to watch? Kids down a well and whatever? No, I don’t have respect for that because that’s a lot of where people get their news. They don’t delve into a newspaper any more.”